We had friends over for brunch. Because they’re doctors, inevitably the conversation turned to medicine. I don’t remember how we got on the subject of nurses, but somehow we did, and we were all trying to out-do each other’s bad nursing stories.

My wife, Xenia, won: “I had finally convinced this family that the right thing to do was withdraw care on their father, and we were going to do a terminal extubation. I always like to give a morphine bolus before doing that, so the patient isn’t gasping for air as soon as the tube comes out. It just looks bad for the family. I looked around for his nurse to get the morphine and couldn’t find her. So I asked another nurse to help me, but she refused because the patient’s nurse wasn’t supposed to be on break. So, instead of helping me with the morphine, she helped me find the missing nurse, who was sitting in the break room eating an egg sandwich. And then the two nurses started arguing while I’m just waiting around for the morphine, and this poor old man’s family is waiting for me. Finally, I said, ‘Look, someone just needs to get me morphine so I can attend to a dying patient.’ And the patient’s nurse, in a huff, said, ‘Fine, I’ll do it, and I’ll just let my egg sandwich get cold.’ It was absolutely ridiculous.”

I should add that Xenia told her story as a joke, just as I had told mine, just as our friends had told theirs.

Malcolm Gladwell, discussing why people tell jokes about themselves (his specific reference was engineers making engineering jokes), said that jokes are “grievances.” Jokes are a way for a group of people to complain: This is the way we think! Why doesn’t everyone else think like us?

The doctor takes his patient into a room and says, “I have some good news and some bad news.”

“I can’t take any more bad news,” the distraught patient says. “Just give me the good news.”

The doctor replies, “They’re going to name this disease after you!”

I think the grievance in that joke is that doctors want their patients to laugh, like them, at how hard this profession can be. Whenever I have a patient who’s also a physician, I end up telling some version of a doctor joke during our encounters. Let’s grieve together, I’m communicating with these jokes. Recently I saw an orthopedic surgeon whose kidney disease, according to his labs, was in complete remission; still, he felt unusually weak and had to cancel some operations. “To me, it seems very different from when –” his wife said.

“It’s the same weakness I’ve had for years,” he interrupted, “and it’s not as big a deal as you’re making it out to be.” He glared at his wife.

“Now, wait a minute,” I said, trying to defuse the situation. “You know what we say – if you’re at the track and the jockey wants to give you a tip, you never interrupt the jockey.” I smiled. He relented and let his wife explain why she was worried that a stroke had been missed at some point.

“Okay,” the patient said when she finished, “now can the horse speak for itself?”

A 7-year-old girl told her mom, “A boy in my class asked me to play doctor today.”

“Tell me exactly what happened,” the nervous mother said.

“Not much. He made me wait 45 minutes and then double-billed the insurance company.”

Doctor jokes are grievances: The system is broken, and a broken system runs the risk of breaking the doctor. During residency, an emergency room doctor told me, “I save lives first, then ask questions later,” when I pointed out to him that the patient he’d just coded, the patient who was now barely alive on a ventilator and whom I was being asked to admit to the medical intensive care unit, had a clear advanced directive in her chart that she didn’t want to be resuscitated or intubated. “We’re going to extubate her as soon as she gets up to the ICU,” I told him in parting. “That’s your call,” he said to my retreating figure. In retrospect, I wish I had turned around and said, “No, that was her call.” Instead, later that night, I sat in the residents lounge and laughed about his “I save lives first” quote with the other overnight residents. We found it hilarious that this doctor actually thought he saved lives.

A patient asks a doctor what he can do to live longer. The doctor replies with a long list of “don’t”s, including nearly everything the patient enjoys.

The patient asks, “If I deny myself all those things, will I live longer?”

The doctor answers, “No, but it will feel that way.”

My father admitted to me that it hurts to see some of his patients switching to his junior partners. “I can understand new patients not wanting to see me,” he said. “They’re looking for at least an 18-year relationship out of their pediatrician, and I know I won’t be in the office for another 18 years. But the 10-year-olds and the 13-year-olds who’ve switched – that still makes me feel bad when I see them going into someone else’s office.” He stopped himself for a moment and then tried to make a joke. “Forget about the office, I may not even be alive in 18 years.” The joke signaled that our conversation was not intended to be a father-son talk, but rather a doctor-doctor conversation. He was giving me permission to laugh.

And I will pass along that favor to my daughter, Juno, if she follows through on her current plans to become a doctor. In daycare, she and her classmates did an art project based on the phrase “When I grow up, I want to be a…” She’d chosen “teacher” as her profession but now wanted to change to “doctor,” so she could go to work with Xenia and me. As a hospitalist, Xenia works in shifts and can reliably leave the hospital at 4:00 PM to pick up the kids from daycare. We have a system: I drop them off, she picks them up. Recently, Juno asked if I could pick her up instead of her mother.

“Because I have to work late,” I said.

“Porque hay muchos enfermos en mi consulta,” I said with a smile, proud of my Spanish and the simple truth of my answer.

“Wooooooooooo,” Juno said with her own smile.

And then we both laughed. 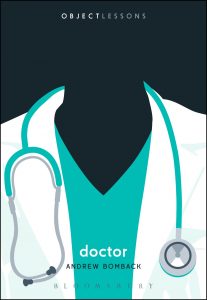