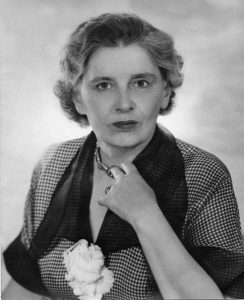 Rebecca West was born on December 21, 1892. To celebrate the 126th anniversary of her birth, Laura Cowan explores one of her unfinished and posthumously published works. This recognition of West (née Cicely Isabel Fairfield) closely coincides with the centennial of the World War I Armistice on 11 November 1918, a topic central to West’s unfinished novel Sunflower.

Partly because of its veiled account of West’s love affairs, Sunflower has been critically neglected. Some attention has been given to comparisons between the novel’s protagonist, the actress Sybil Fassendyl (Sunflower), and its author Rebecca West.  More interesting than the transformation of writer to actress is the metamorphosis of West’s lover H. G. Wells.  The Socialist writer Wells becomes the novel’s male protagonist Essington, a prominent Liberal Party politician. Written in the mid-1920s, West’s posthumously-published novel is an indictment of the British Liberal Party and especially its role in Great Britain’s involvement in World War I and in the Treaty of Versailles.

Vincent Sherry argues in The Great War and the Language of Modernism that the salient features of modernist literature stem from the “irrationality” of the logic behind World War I and, in particular, the British Liberal Party’s failure to “rationalize” a war which contradicted the basic tenets of its philosophy.  Like Sherry, West analyzes the political and rhetorical consequences of Liberalism’s justifications for World War I. Her novel embodies the new modernist aesthetic that emerges from this historical moment.

In the novel, Essington’s adherence to his Liberal party principles made him “fail at Versailles” because his desire for a lasting peace made him object to the Allies’ punitive measures against Germany. This refusal ruined his political career; he was “thrown overboard there [Versailles] and his career ended” (26). Essington claims that the Liberal Party’s decline was clinched by the war, but that “the rot began before the war” (50).  In other words, had the British Liberal Party been consistent with its tenets–including pacifism, self-determination, and rational, ethical decision-making–Great Britain would not have entered World War I.  Essington believes that the Liberal Party sacrificed principles for what he calls “expediency” (50) and “fiddling negotiation” (47).

By creating the character Essington, West can both denounce the weaknesses of the Liberal values that shaped modern culture and decry their demise. Essington “never distorted the logic of his argument to avenge his disappointment” (26).

Nonetheless, Essington’s reason has its limits. Reason’s limitations are particularly vivid in Essington’s relationship with Sunflower, who suffers emotionally because of her lover’s commitment to “his false religion of thought” (114).

In West’s gendered politics, Essington embodies a sort of doomed and sterile “male reason,” while “stupid” Sunflower offers an alternative “way of looking at the world” through intuition and emotions (183). As an inarticulate, working-class woman in a marginalized profession, Sunflower’s greater wisdom is an affront to the dominant discourses and social hierarchies of her contemporary world. West insists on the “rightness” of Sunflower’s perspective in many incidents and especially in a courtroom scene where a contextual, compassionate judgment—that contrasts with a literal, narrow, legal interpretation–achieves justice.

Several stylistic devices in Sunflower reflect an aesthetic of intuition and interrogate the “liberal” assumptions that are falling “all to pieces” (2). Extravagant metaphors in the long passages of Sunflower’s musings and her fanciful, imaginative visions contrast with Essington’s encomia to reason and abstract ideas. In their evocation of symbolist poems, these visions’ excessive and elevated language eschew any accusation of “expediency” and celebrate Sunflower’s “way of looking at things.” These same imaginative digressions also disrupt the narrative and the linear “progress” of the novel to call into question the Liberal faith in rational meliorism. It is not surprising that West’s skepticism about Liberalism’s belief in progress should result in a novel that stops and starts and finally refuses to finish.

Although Sunflower presents an aesthetic response, it offers no political solution to the British Liberal Party’s failure or to the defects of the Liberal position. It does, nonetheless, offer us an opportunity to reflect on past and present politics and to admire Rebecca West whose works insist that readers grapple with the principles and values implicit and explicit in historical and contemporary politics.

Sherry, Vincent. The Great War and the Language of Modernism. Oxford UP, 2003. 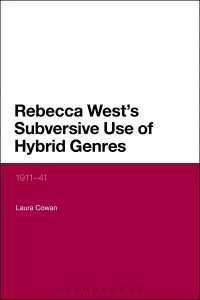 Laura Cowan is Associate Professor of English Literature at the University of Maine, USA. She is editor of the Centennial Essay Collection, T. S. Eliot Man and Poet (1988) and a previous Managing Editor and Co-Editor of the National Poetry Foundation journal Paideuma: Studies in American and British Modernist Poetry. Her book Rebecca West’s Subversive Use of Hybrid Genres: 1911-41 is available from Bloomsbury.