Edgar Landgraf answered some questions for us about his new co-edited volume, Posthumanism in the Age of Humanism: Mind, Matter, and the Life Sciences after Kant, now available from the series New Directions in German Studies.

Aims to bring historical context and theoretical reflection to bear on a vibrant field of philosophical and cultural inquiry.

I am generally interested in “theory” and in interdisciplinary approaches to the study of literature, culture, and philosophy. The dialogue between science and philosophy was especially lively and fruitful in the early nineteenth century as it is now again, 200 years later. Following contemporary  debates about posthumanism also made me notice a need for more historical context and theoretical reflection as many of posthumanism’s concerns can be traced back to developments and discussions around 1800.

I started getting interested in posthumanism 5 or 6 years ago—though some of the thinkers associated with this movement have been on my radar for longer. I started teaching a couple of seminars on posthumanism and organized a panel on Posthumanism in the Age of Humanism for the 2016 MLA convention in Austin, TX. The panel was such a success that I thought immediately this is great topic for an essay collection. I started looking for coeditors and was exciated when Leif and Gabe quickly agreed to join the project. The rest is history.

Most of the contributions deal with texts from around 1800 that have received little or no attention from posthumanists. The exection would be Kant—who figures prominently in our volume. Unlike other discussions of Kant by posthumanists, however, we don’t make Kant out to be a bogeyman of sorts, but show instead why posthumanism should reengage with Kant and the legacy of his thought.

I was somewhat equally in interested in literature and (continental) philosophy. Literary theory has allowed me to combine and pursue both of these interstes. Over time, I have become more and more interested in the political and ethical questions raised by literary and philosophical texts, and in theoretical paradigms—such as posthumanism–that look at these questions in innovative ways.

Hmmm, may I include my own Improvisation as Art: Conceptual Challenges and Historical Perspectives? What I cherish about Bloomsbury is its openness to publish scholarship that explores new directions in literary studies, philosophy and literature. It is not a conincidence that Bloomsbury contains a strong portfolio of works on posthumanism, including Stefan Herbrechter’s important study: Posthumanism: A Critical Analysis. 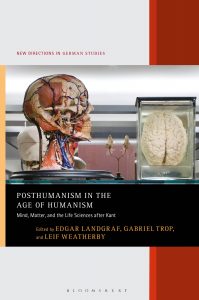 Edgar Landgraf is Professor of German in the Department of German, Russian, and East Asian Languages at Bowling Green State University, USA. He is the author of Improvisation as Art: Conceptual Challenges, Historical Perspectives (Bloomsbury, 2011). He is the co-editor of Posthumanism in the Age of Humanism: Mind, Matter, and the Life Sciences after Kant, now available from the series New Directions in German Studies.