Because Kevin Barry’s biographical novel Beatlebone is about John Lennon, one could wrongly assume that it provides an accurate picture of the Beatles’ lead singer. But what readers actually get is Barry’s vision of life and art, and he merely uses Lennon in order to achieve his artistic goal. As he says in his interview: “We don’t write, or draw, or make music because we are fine, we do it because we’re messed up, because life is meaningless, cruel, often disastrous and ridiculous and there is no fucking shape to it. That’s why we make art, as an attempt to put meaning and shape onto our lives.” So this is what Barry does in his most recent biographical novel.

We can safely say that the biographical novel is now one of the most dominant literary forms in the world. Global luminaries like J.M. Coetzee, Margaret Atwood, Peter Carey, and Hilary Mantel are just a few who have authored groundbreaking biofictions that have challenged traditional views of literature and have generated new ways of seeing and experiencing history, life, and our contemporary world. But what exactly is the biographical novel? And why has it become a dominant literary form?

The relatively recent turn to biofiction makes sense. With the overpowering rise of dehumanizing technologies, bureaucracies, and corporations, it can feel as if our lives are nothing more than pre-scripted formulas. Authors of biofiction use literature to identify what is distinctly human in the midst of so much dehumanization. According to these writers, looking to the lives of Virginia Woolf, Jiang Ching, and Roger Casement is both compelling and useful, not because we have a titillating curiosity about who they were, but because they provide us with an “existential map” for constructing meaningful lives in the present. As Rosa Montero, who has authored a biographical novel about Marie Curie, says: “One doesn’t write a novel to simply illuminate through images or illustrations, let’s say, the biography of another person, but to try to better understand the world, to search for the meaning of existence.”

This approach also explains David Ebershoff’s novel (and Hollywood film) The Danish Girl, which is about the first person to have a sex confirmation surgery. He calls his biographical novel “life art,” a literary form that models the process of imagining something new and original into being. Ebershoff strategically makes his protagonist more universal, because he wants his readers to identify with the character, to learn through careful reading how they too can become artists of their own lives by bringing “into creation something that is not yet there.”

Put simply, biographical fiction challenges and disrupts. Author of the novel and Hollywood film Room and many biographical novels, Emma Donoghue says: “At its best, I find that the biographical novel makes people uncomfortable.” The current zombie craze is responding to the fact that so many feel that their lives are not really being lived, that they are merely the walking undead. The biographical novel strategically makes us uncomfortable, because it is trying to jolt us into creative, imaginative, original, and purposeful living. Colum McCann has authored two spectacular biographical novels, and in his interview, he identifies the most important goal of biofiction, which is to liberate the reader into the embodied wakefulness of a creating and creative consciousness, a consciousness that leads to new possibilities in seeing and life.

Conversations with Biographical Novelists is more than just a collection of interviews with some of the world’s most famous contemporary authors. It is a work that clarifies how literature makes possible fuller and more meaningful human living.

Order Michael Lackey’s Truthful Fictions and Conversations with Biographical Novelists on www.bloomsbury.com and receive 35% off both books! Offer available through December 31, 2018 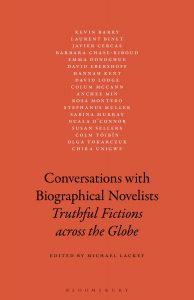 Michael Lackey is Distinguished McKnight University Professor of English at the University of Minnesota, USA. He is the author of The Modernist God State: A Literary Study of the Nazis’ Christian Reich (2012),  African American Atheists and Political Liberation: A Study of the Socio-Cultural Dynamics of Faith, and The American Biographical Novel (2016). He is also the editor of The Haverford Discussions: A Black Integrationist Manifesto for Racial Justice (2013), Truthful Fictions: Conversations with American Biographical Novelists (2014), and Conversations with Biographical Novelists: Truthful Fictions Across the Globe, now available from Bloomsbury.