Writing Modernism’s Print Cultures gave us an oddly divided perspective on modernism because our research soon made clear that what seems to recent scholars to be cutting edge work on periodicals and advertising, markets and commodities, networks and typography was in fact all invented a hundred years ago by the very modernists we study.  Somehow the long shadow cast by the New Critics’ rather austere and high-minded version of modernism had obscured the wit and inventiveness of young artists and writers who deployed their understanding of markets and modes of production to promote their work in a world of rapidly expanding print culture.  Indeed, it became a refrain of Faye’s to remind Mark that our book was supposed to centre on recent “new modernist” scholarship and not on what the modernists themselves had had to say about print culture.

But so much of what they say is irresistibly delightful. In her memoir The Passionate Years (1935), Caresse Crosby—whose Black Sun Press produced modernist limited editions renowned for the sensual appeal of their paper and design—described how in 1913 she patented her invention of a backless brassière. Having borrowed $100 to rent a room, she presented a few hundred bras ‘to the public in very superior packaging (the de luxe edition blood must have already been stirring in my veins)’ (74). In Modernism’s Print Cultures, we contrasted Crosby’s understanding that a book could be a luxury commodity similar to expensive lingerie with the more dour view of Leonard Woolf, founder with his wife, Virginia, of the Hogarth Press, who argued that books are ‘not a commodity which, like patent medicines, cigarettes, or mustard, the consumer buys or can be induced to buy by the skill of the advertiser’ (‘On Advertising’ 49).

The effects of the ready availability of cheap printing presses in the late nineteenth- and early twentieth centuries can be likened to the access afforded to today’s bloggers and self-publishers. When Harry and Caresse Crosby wanted to see their poems in print, it did not occur to them ‘to submit them to a publishing house—the simplest way to get a poem into a book was to print the book!’ (Crosby 156). And today anyone can get into “print” if they do it online.

When Clive Bell (whose biography Mark is writing for Bloomsbury) reviewed Gilbert Seldes’s remarkable book on the Seven Lively Arts in 1924, he allowed that European readers might be expected to skip the ‘prairies of print’ with the names of obscure ‘American music-hall performers, paragraph-writers and comic illustrators’, but advised against this omission because Seldes’s analysis of the ‘lively arts’ of Jazz, ragtime, movies, music hall turns, and comic strips was so good.  Anyone who peruses the programme of a Modernist Studies Association conference today would be struck by how prescient Bell was about our areas of interest.  In Modernism’s Print Cultures, we show how the scholarship of the last twenty years or so has recreated a detailed picture of the rich and varied world of print culture which was modernism’s milieu, from Ezra Pound’s trenchant ‘Studies in Contemporary Mentality’ for the New Age in 1917-18 (which Bob Scholes and Cliff Wulfman have argued founded modern periodical studies) to the typographical experiments and inventions of Apollinaire or Jan Tschichold. 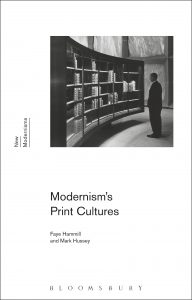 Faye Hammill is Professor of English at the University of Glasgow, UK. Her previous books include Sophistication: A Literary and Cultural History (2010), winner of the European Society for the Study of English book award and Women, Celebrity and Literary Culture Between the Wars (2007). Mark Hussey is Professor of English at Pace University, USA. He is editor of the Cambridge edition of Virginia Woolf’s Between the Acts (2011) and author of Virginia Woolf A to Z: The Essential Reference to Her Life and Writings (1996). They are co-authors of Modernism’s Print Cultures, part of Bloomsbury’s New Modernisms series.