Let’s think about scarcity and law—a theme that I explore throughout Modernism and the Law. Laws seek to produce a kind of scarcity in many areas of human behavior and desire. Criminal libel laws, for example, were enforced to decrease the incidence of reputational attacks and, along with them, the physical brawling and public mischief that such attacks could incite. (This was one of the purposes of Oscar Wilde’s ill-advised prosecution of the Marquess of Queensberry in 1895. The potential for violence between Queensberry and his son, Lord Alfred Douglas, was escalating daily.)

Prosecutors and vice societies employed obscenity laws to remove controversial cultural goods from bookstores, warehouses, and the mails, as if the physical disappearance of Ulysses and The Well of Loneliness from public life could somehow be a measure of moral growth in the population. There was a quantitative passion in this imagined equivalency. The pursuit of books as corrupting things invited orgies of public cleansing not unlike the celebrated images of federal agents staving kegs of illegal beer during the contemporaneous Prohibition. A favorite activity of vice societies was to report the quantities of objectionable books and pictures they had seized during the previous year. Anthony Comstock boasted late in life that he had “convicted persons enough to fill a passenger train of sixty-one coaches.”

This numbers game curiously mirrored copyright law. The copyright monopoly has been justified, in the Anglo-American context, as a spur to creative output. Creativity will be incentivized, this theory passionately holds, if authors are legally empowered to control the supply and price of books and other creative products. Once again, we see the lawmaker’s fantasy that less equals more. Copyrights are government-granted rights that erect invisible fences around infinitely reproducible public goods; they permit informational monopolists to reintroduce scarcity in a world where technology and markets have solved that problem. By giving authors the power to create scarcity through legal monopoly, copyright promises to enlarge the great storehouse of creative works—achieving more through less. That is one of copyright’s paradoxes—regularly asserted, never fully proved. Just as obscenity law’s vision of moral progress demanded a dearth of cultural products, so copyright has sought to realize its dream of creative abundance through law-induced scarcity.

The problem for modernism was (and is) that these laws had no early expiration date. It took decades of litigation, from the 1920s through the 1960s, before works like Lady Chatterley’s Lover, Tropic of Cancer, and God’s Little Acre could at last be enjoyed in unexpurgated forms. First Amendment law in the United States and comparable statutory reforms in Britain allowed modernism, long after the movement had ended, to overcome the effects of enforced scarcity induced by formal and informal institutions: legislatures, courts, prosecutors, purity groups, and lending libraries. It’s as if the production and distribution capacities of modernism were misaligned. Modernism’s works had mostly been produced by 1945 (or choose your own endpoint), but its distribution channels were not fully active until decades later, when watershed cases like Roth v. United States finally permitted unchecked consumption of books, art, and films free from bowdlerization.

Copyrights have extended their scarcity-inducing effects into the present. The long copyrights of modernism—which will be expiring slowly and unevenly for years to come—continue to make the dysfunctions of orphan works, permissions stalemates, and publishers’ fears a concern for scholars and creative adapters. Long-lived copyrights allow choices concerning cultural scarcity to pass to the unpredictable descendants and transferees of modernist authors, remote chronologically and sometimes temperamentally from those forebears. Think how much of modernism—unpublished letters, diaries, drafts—remains legally confined to repositories, helpless to increase the celebrated storehouse of culture. Again, we have a mismatch between production and distribution. The creative products are there—much of it preserved through the institutionalization of modernism in university and private archives—but copyright’s reducing plan continues to inhibit distribution.

The longevity of obscenity and copyright laws has shaped the history of modernism. Long laws have stretched modernism’s endpoint well beyond any commonly recognized floruit, causing the period to inhabit an ever-receding future presided over, these days at least, by legislative extensions of intangible property rights. When will we be allowed to see modernism face to face, without the obscuring mirrors of legal regulation? I don’t think we can hope to understand modernism fully until all the effects of scarcity-making laws have been purged. That’s why, in studying modernism, we have to study its laws as well. They are modernism’s secret sharers. 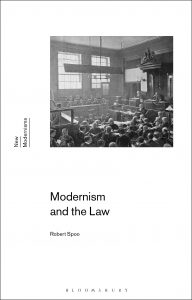 Robert Spoo is Chapman Distinguished Professor at the University of Tulsa College of Law, USA. A former editor of the James Joyce Quarterly, his many previous publications include Without Copyrights: Piracy, Publishing, and the Public Domain and James Joyce and the Language of History. He is the author of Modernism and the Law, part of Bloomsbury’s New Modernisms series. His work on Modernism and the Law was supported by a Guggenheim Foundation Fellowship.