A polarized environment in which women argue that their experiences are different from men’s, that men oppress them, and that women have a right to claim their own experience. A moment of crisis that threatens men’s world of privilege; men fight back with anger, dismissal, and belligerence that look and feel extreme. Is this 2018 or 1918? The parallels between our current moment and the modernist moment are profound.

This fall the United States has been transfixed by the accusation of sexual assault lodged against a male nominee for the country’s Supreme Court. The spectacle, debate, and fury surrounding the nomination process is only the latest in a series of recent public discussions occasioned by shocking behavior coming to light: a recording of then-Presidential candidate Donald Trump detailing his ability to grab women’s genitalia, the harassment of a queer male doctoral student by a queer female full professor, and other events too dispiriting to enumerate.

Such scandals raise multiple questions that the history of modernist literature and its critical reception still force us to ask: how does socialization blind us to the experiences, the pain, of others? When does sexualized speech imply sexualized acts? What do disempowered individuals have to endure to succeed in highly hierarchized industries and social strata?  Presumptions about women’s and men’s sexual roles and desires, social power, and the public narratives individuals tell about themselves, are always at work behind such stories and the questions we ask about them.

While we might like to endorse a narrative of progress that has altered our common understanding of masculinity, women, sexuality, and the law, our book Modernism, Sex, and Gender demonstrates that though the specific conditions have changed, many of the fundamental questions literary modernists asked about sex and gender are the questions we are still asking ourselves today.

At the same time, there are key differences between 1918 and 2018. However marginalized some communities continue to feel, however frequently allegations of abuse still surface, there are new voices involved in constructing narratives and in asking new questions. Modernism, Sex, and Gender introduces readers to over a century of debate and critical history about modernism informed, then and now, by ideas on gender, sexuality, the law, and the purpose of literature.

Second-wave feminism is at the nexus of the past fifty years of modernist critical history.  The feminist activity in the 1960s, 70s and 80s focused on inequality in the workplace, women’s sexuality, abortion rights, and, more broadly, raised consciousness amongst women about how they participated in their own unequal treatment at work and at home.  One cannot overstate how profoundly second-wave feminist scholars altered the landscape of modernism in terms of what we read and study as well as what counts as art.  Critics began to challenge the almost all-male, heterosexual modernist canon by “rediscovering” women writers who had written profusely during the modernist period and had been silenced to varying degrees. Once the feminist shift occurred, gay and lesbian perspectives on modernist writers quickly followed along with a proliferation of scholarship on non-white authors. In the 1970s and 80s scholarship on modernism focused on the essential identities of modernist writers as profoundly influencing their written work–in this version, women write about women’s experience–but in the 1990s and 2000s, in the wake of post-structuralism and deconstruction, queer theorists challenged essentialist notions of identity, pointing out that binary structures (male/female, hetero/homosexual, masculinity/femininity) limited understanding and analysis of identity’s perpetual formation.

If such changes provide encouraging evidence of what has changed over the last century, there is also disheartening evidence of history’s inertia. The law’s relationship to female and queer sexuality still makes for sobering reading. While some of the mythic stories about modernism feature heroic males battling narrow-minded censors, such tales elide a central truth: the bulk of political and legal action against modernist literature was an effort to police female, as well as queer, sexuality. Take, for example, one of the case studies in Modernism, Sex, and Gender: the prosecutions, and literary reception, of Radclyffe Hall’s The Well of Loneliness (1928). Hall was almost ousted from the British trial of her own book and publisher after she shouted “shame!” at one of the the Magistrate’s particularly outrageous comments. Although the decision that The Well was obscene, and therefore banned, made Hall’s novel a succèss du scandale, Hall never entirely recovered from the treatment her novel–a fictionalized version of her own personal story–received in court. It remained a trauma for the rest of her life, but in a literary and historical twist, her book might never have been studied had fear of women’s sexuality writ large not been so central an organizing principle, then and now.

Writing Modernism, Sex, and Gender was thus energizing, as we reacquainted ourselves with (and inform readers about) the scholars and texts that broke new ground, forever changing the canon and the field of modernist studies. At the same time, it serves as a reminder of the work still before us: about the stories we need to uncover, the questions we should be asking, and the lives and texts that our students need to read to understand over a century of tumult around gender, sexuality, and modernism. 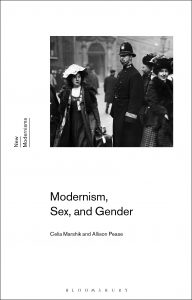 Celia Marshik is Professor of English at Stony Brook University, USA. She is editor of The Cambridge Companion to Modernist Culture (2015) and author of British Modernism and Censorship (2009) and At the Mercy of Their Clothes: Modernism, the Middlebrow, and British Garment Culture (2016). Allison Pease is Professor of English at John Jay College, City University of New York, USA. She is author of Modernism, Mass Culture, and the Aesthetics of Obscenity (2000), Modernism, Feminism, and the Culture of Boredom (2012) and editor of The Cambridge Companion to “To the Lighthouse” (2014). They are co-authors of Modernism, Sex, and Gender, part of Bloomsbury’s New Modernisms series.