The New Modernisms series began with the question of where to begin.  Modernist studies is a field of myriad sites and routes, but very few roadmaps exist for navigating them.  It’s not simply a matter of how to get from Point A to Point B; the difficulty lies in finding Point A in the first place and in understanding its very orientation to Point B–and to numerous other points.  The New Modernisms series has aimed to provide maps–to survey the terrain, to provide clear paths across and through it, and to suggest why the field has taken the shape that it has over time.  With six volumes now published, and two more appearing in late 2018, we find ourselves well on the way to what feels like a robust, if necessarily incomplete, set of guides.

We realized in our conversations with one another some years ago, and with countless colleagues over time, that the field had become so expansive, so rapidly changing, and sometimes so contentious that it was hard to know where one’s place in the field even lay.  It was also hard to feel confident that one’s sense of a point of entry into any topics within the field was still germane, or that the routes we knew through a concept were still paved at all. And, in that way, this series was born as much as out of our deep engagements with the dynamic field of modernist studies over the years as it was our astonishment at how much we don’t know about the field.  (Indeed, one of us confessed to such a feeling in a recent essay.)

We’ve been quite proud of the volumes that have appeared thus far and we have learned tons from them.  They have situated modernist studies relative to a host of other fields, concerns, and movements, all while understanding what has been called “the New Modernist Studies” as something with its own life-force.  Modernism’s global contexts, its print cultures, its relationship to war and violence, its imbrication in science and technology, and its contestations with the law have been plotted out expertly by the authors in our series.  Our own book, Modernism: Evolution of an Idea (2015), attempted to provide the historical background for such work by tracing how this peculiar term–“modernism”–battled its way from the outskirts of avant-garde metropolitan aesthetics in the late nineteenth century to the sign that names the largest association for the study of twentieth-century cultures in the world (the Modernist Studies Association) and its official journal (Modernism/modernity).  To say that we found ourselves perpetually and endlessly surprised by what we found in our research would be an understatement, and we hope readers will benefit from a similar disorientation that leads to a plausible orientation of future directions.

We’ll never have a complete GPS plotting of the field of modernist studies–and that’s a good problem to have.  Instead, we’ll keep pressing upon what matters to the scholars who constitute the field and working to publish books that make a notoriously inscrutable movement something whose intellectual paths will be equal parts frustrating and enlivening. 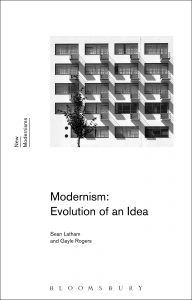 Sean Latham is Pauline Walter Endowed Chair of English and Comparative Literature and director of the Oklahoma Center for the Humanities. He is editor of the James Joyce Quarterly, co-founder of the Modernist Journals Project. His teaching and research focuses on modernist studies, James Joyce, periodicals, media theory, and the digital humanities. He is the author or editor of nine books including “Am I a Snob?”: Modernism and the Novel ( 2003), The Art of Scandal: Modernism, Libel Law, and the Roman à Clef (2009), and The Little Review Ulysses (2015). Gayle Rogers is Professor of English at the University of Pittsburgh, USA. He works primarily on global modernisms, literary history, translation, comparative literature, and periodicals. His publications include Incomparable Empires: Modernism and the Translation of Spanish and American Literature (2016), Modernism and the New Spain: Britain, Cosmopolitan Europe, and Literary History (2012), and a number of works in PMLA, Modernism/Modernity, Comparative Literature, NOVEL, Journal of Modern Literature, James Joyce Quarterly, The Oxford Handbook of Global Modernisms, Journal of Modern Periodical Studies, Modern Fiction Studies, Revista de Estudios Orteguianos, and 100 Escritores del siglo XX. They are co-editors of the Bloomsbury series New Modernisms, and co-authors of Modernism: Evolution of an Idea (2015).