When I was asked by the New Modernisms series editors to consider contributing a volume on modernism, science, and technology, I jumped at the chance.  I had long been researching the mutually informing and generative inter-relationships among the sciences and the arts and humanities during the period—indeed, the rich and distinctive culture that emerged from those intersections was what attracted me to modernism in the first place.  Clarifying the implications of a proliferation of paradigm shifts in the sciences (and related technological developments) and examining the “new” in a period marked by rapid modernization helped me to better understand the modernist literature I had been teaching for almost a quarter of a century.

But writing the book also helped me appreciate something I had been seeing in the classroom, especially in a course at Penn State I team-teach with a chemistry professor.  In that class, generically called “Chemistry and Literature,” I often see a healthy skepticism about the old “two cultures” chestnut offered up by C.P. Snow in his 1959 Rede Lecture at Cambridge University, in which Snow argued that literary intellectuals and scientists are separated by “a gulf of mutual incomprehension.”  To be sure, our students perceive contradictory positions toward “science” in our society at large and in our federal government, which significantly funds scientific research and supports technological innovation even as some of the most well-known public officials wage war on scientific expertise. Yet this seems not to have dampened students’ engagement with science and technology. Nor have such mixed messages fundamentally undermined our students’ willingness to view their education and their place in the world not through the bifurcating lens of “two cultures” but rather through an effort to understand the complex inter-relationships of cultural domains. 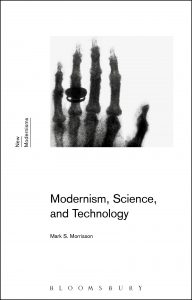 Mark S. Morrisson is Professor and Head of Department at Penn State University, USA. A former President of the Modernist Studies Association, he is co-editor of The Journal of Periodical Studies and his previous books include The Public Face of Modernism: Little Magazines, Audiences, and Reception 1905-1920 (2001) and Modern Alchemy: Occultism and the Emergence of Atomic Theory (2007). He is the author of Modernism, Science, and Technology, part of Bloomsbury’s New Modernisms series.