I have been exhilarated by the resurgence of feminism in the 21st century, in the #MeToo movement, in the million-woman protest marches of January 2017, in renewed efforts to ratify the Equal Rights Amendment, and in the record numbers of women running for office in the U. S. today.

But I am frequently dismayed at how often it seems we are once again reinventing the wheel when it comes to recognizing the depth and extent of women’s oppression and understanding the roots of the virulent misogyny we see all around us.

I wrote my book, Feminist Theory: The Intellectual Traditions (now in its fourth edition with 66 printings) in hopes of providing an accessible history of the major ideas of feminist theory.  I often wish people in the #MeToo movement would read the book in order to get a theoretical handle on the abuses and injuries they have suffered.  Knowledge is power. Knowing that you are not alone, that there are political reasons for your suffering, and that there are ways to fight back—this is empowering knowledge.

But it isn’t just the negative aspects of women’s oppression that the book addresses. It also offers a vision of a world governed by women’s concerns and values.

I have often felt and still feel that women have an historic role to play in reorienting the world away from endless wars and violence and away from out-of-control corporate despoliation of the environment.  In that utopian year 1968 feminist Roxanne Dunbar wrote, “Feminism must be asserted by women . . . as the basis of revolutionary social change.”

Feminist Theory outlines feminist ideas about what such revolutionary social change might entail:  a future in which compassion, caring, and nurturance replace exploitation, domination, greed, contempt, trafficking, and profiteering.

Is such a vision utopian? Perhaps, but what is the alternative? 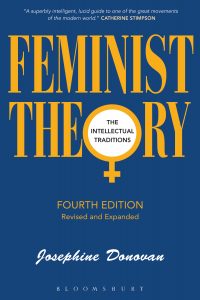 Josephine Donovan is Professor Emerita of English at the University of Maine, USA. She is the author or editor of 13 books, including Women and the Rise of the Novel, 1405-1726 (2d. rev. ed., 2013), which was named a Choice Outstanding Academic Title, After the Fall (1989), and The Feminist Care Tradition in Animal Ethics (2007, co-edited with Carol J. Adams). Her groundbreaking Feminist Theory (first published, 1985; fourth edition, 2012), which was also named a Choice Outstanding Academic Title and described as “the classic survey and analysis of the roots and development of feminist theory,” has been translated into Chinese, Turkish, and Japanese.