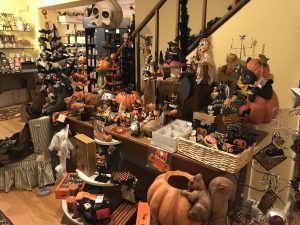 Holidays in the U.S. announce themselves through, among other things, domestic and commercial décor – Christmas being the most heavy-handed, with Halloween not far behind, and Valentine’s Day, St. Patrick’s Day, Easter, and the color-theme twins of Memorial Day and the 4th of July all putting in noble efforts.

Traditionally, much of autumnal and winter holiday décor has tried to bring dying nature indoors – the pumpkins we turn into Jack O’Lanterns to ward off demons, the squash cornucopias and bunches of maize we arrange as centerpieces and door earrings because food is so abundant it hardly needs to be eaten, and the evergreen trees we zhuzh up with ornaments and lights. The pumpkins slowly (or quickly) rot on our doorstops until we have to pick them up with gloves and chuck them in the trash. The maize and tabletop gourds follow suit. Christmas trees, after shedding stabby, sappy needles everywhere, turn brown and must be dragged to the curb. It’s all such a nuisance.

In the modern era, however, annoyance is a choice because one can have one’s Jack O’Lantern and keep it too. 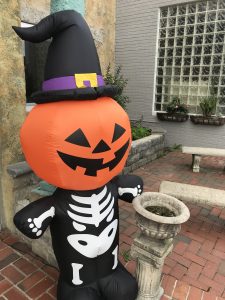 Plastics, the environmental devil, save us scads of time and pain, so we hate ourselves for loving them for their two-sided convenience. If you buy an electric smiling Jack O’Lantern at your local superstore, then you lose the experience of going to the pumpkin patch with your kids, picking out that perfect pumpkin, Sharpy-ing a crazy face on it at home, digging out the pumpkin slop and seeds inside that you’ll eat later in muffin and trail mix form, and cutting out your own unique Jack’s face that you’ll see every time you come home. And what will you gain?

Holiday traditions can be tinged with joy, but usually just in sappy movies on the Hallmark Channel. In the documentary version, children fight over which pumpkin to pick, children make impossible designs with their Sharpies (then draw on the table or their siblings’ arms), children want to cut the pumpkin themselves, children hurt themselves with the knife, you hurt yourself with the knife, the pumpkin slop is gross and you can’t cook anyhow, you don’t have a stoop to put Jack on, you do have a stoop but the rotten neighbor kids use Jack for soccer practice a couple hours after you put him out, Jack thrives on your stoop but you can never remember to light the candle inside so he’s just hanging out in the dark accomplishing nothing, or you do everything right, and it was totally worth it… until you see someone with a far snazzier Jack, one of those pumpkins with an intricate and stylish haunted house carved into their pumpkin – a friggin’ filigreed work of art – and wonder, if life isn’t a competition, why does it always feel like you’re losing?

Still, I don’t advocate for buying a plastic pumpkin anymore than I do for a plastic Christmas tree. There’s something to be said for giving yourself carpal tunnel sawing away at a spruce the Saturday after Thanksgiving when the wind chill makes it feel like 15 degrees Fahrenheit at the Knickerbockers’ Christmas Tree Farm or resurrecting an old back injury hauling it to the car afterwards and tying it to the top of your Honda Civic. Not only are you keeping the Knickerbocker family in business, experiences that have some struggle or pain stick in our memories far longer than the easy, breezy ones.

So, here’s what I will say. If you do decide to go for décor that you can reuse year after year, no muss, no fuss, do yourself a favor – add a little muss and fuss back in. Get your artificial holiday wreath from Michael’s when it opens at 7:00 AM (but be in line by 6:00) on Black Friday. If you’re going to get pre-decorated Easter Eggs instead of doing the pysanka at home, force yourself to spend an hour with your Ukrainian great-aunt so she can tell you how disappointed she is in you. And if you’re not going to stick a real skeleton in the fake electric chair on your lawn at Halloween, at least pick some good offal from the local butcher to add some realism to its chest cavity.

Because the tradition of decorating for the holidays isn’t about finding joy in the season; it’s about creating indelible memories through which, when you look back on them, help you narrate the story of your life. And the quality of your decorations isn’t going to be what affects the quality of your memories; it’s the great suffering (or great joy if you’re Cameron Candace Bure and Niall Matter saving Christmas through the power of holly and ivy) that makes them stick.

Kati Stevens is a public affairs specialist based in Washington, D.C. Her writing has appeared in The Hairpin and The Billfold. Her new book Fake is now available from Bloomsbury’s Object Lessons series.