As a Ph.D. student in English-Creative Writing at University of Wisconsin-Milwaukee, I became interested in digital writing across composition, professional writing, and creative writing. I was surprised to find so little scholarship on digital creative writing, so one of my advisors suggested I look at work in the still-nascent field of game studies and game-based learning. (Aside: The lack of digital creative writing scholarship was also the impetus for our co-edited Creative Writing in the Digital Age, also published by Bloomsbury Academic.) While research games and learning, I rediscovered my love of role-playing games and imagined a course that used games to teach fiction writing. It took some convincing of my advisors, but I was eventually allowed to teach a 200-level topics class named “Gaming, Worldbuilding, and Narrative” in spring 2011. Little did I know that my career would never be the same.

In this class, students learned about the genre of post-apocalyptic fiction through reading short stories, watching films, and playing the digital role-playing game Fallout 3. After we examined a variety of post-apocalyptic worlds, they collaboratively created a post-apocalyptic version of Milwaukee by populating a wiki with people, places, and things, and pinning the entries to an actual Google Map of the city. Then they created characters and explored their world through role-playing sessions and wrote fiction from their characters’ perspectives. The course far exceeded all of our expectations. The students loved using a role-playing game as the engine for their fiction, but I became much more interested in how they negotiated the worldbuilding process. I kept thinking about important aspects that our world lacked. We had no idea, for example, how the apocalypse had affected race or gender relations, or whether organized religion still had a place in society. I wanted to try a different approach, and as soon as possible!

Since 2011, I’ve brought worldbuilding and role-playing into my classrooms again and again, often tinkering, usually improving, but always enjoying the level of engagement I witness. As my approach evolved, I identified some of the most prominent social forces at play in any given world, and how they interconnect in complex ways. In Collaborative Worldbuilding for Writers and Gamers, I refer to them as four structural categories: governance, economics, social relations, and cultural influences. Within these four broad structures, there are fourteen substructures, such as Rule of Law, Wealth Distribution, Gender Relations, and Military Influence. Each substructure is given a number from 1 (meaning very little of it in the world) to a 5 (meaning it is extremely strong); some substructures are identified as undergoing change, either growing or diminishing. Definitions for the substructures and numeric values are left intentionally broad as to be interpreted in multiple ways.

How and why the society operates in the way it does gets fleshed out as the group begins writing a metanarrative, or a story about the world. For students, it becomes very apparent that the characters they’re creating will experience the world differently based where they fit into society. It might depend on the character’s race, class, gender, or sexual orientation, or perhaps personal beliefs, such as if they are anti-government or pro-religion. When building worlds, we always come back to the differences in lived experiences of the people living in a given society at that moment in time, or what I call the point of the present. The entire process requires a great deal of critical thinking, dialogue, and compromise in order for the students to create their worlds, and the collaborative nature of the project naturally draws on their own diverse perspectives. 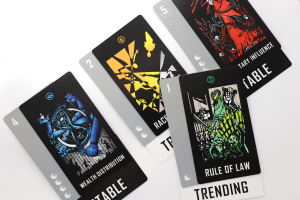 Leveraging my knowledge of games and learning, I’ve also developed a collaborative worldbuilding card deck that can be used to randomly generate fictional worlds, or it can be used to model worlds seen in literature, television, film, comics, games, or even history and current events. The deck isn’t necessary for the book and vice versa, but I designed them to be used together. I’ve run workshops with the deck for writers, teachers, animators, game designers and more, and it’s a tool that never fails to spark interesting discussion and fascinating worlds.

I hope you’ll visit collaborativeworldbuilding.com to learn more about the book and worldbuilding deck. A free print-and-play version of the deck is available on the site, and if you find you like it, you may be interested in purchasing a pro deck with color artwork from The Game Crafter. I also encourage you to join the mailing list for all the latest news, tips, and advice on worldbuilding projects. Happy worldbuilding! 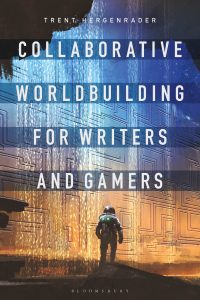 Trent Hergenrader is Assistant Professor in the Department of English at the Rochester Institute of Technology, USA. His fiction writing has appeared in such places as Fantasy & Science Fiction, The Mammoth Book of Dieselpunk, and Best Horror of the Year #1. He is co-editor of Creative Writing in the Digital Age (Bloomsbury, 2015) and Creative Writing Innovations (Bloomsbury, 2017). His new book, Collaborative Worldbuilding for Writers and Gamers, is now available from Bloomsbury.