The Big Somewhere: Essays on James Ellroy’s Noir World is a comprehensive study of the Demon Dog of American Crime Fiction. The literary career of Ellroy is explored in full: from his legacy to his influence on other authors, via all the major works in the LA Quartet and Underworld USA series. As editor of this anthology, it was my task to outline the themes of the book and recruit the contributors. The latter task was relatively straightforward, as I had organised the James Ellroy: Visions of Noir conference held at the University of Liverpool in 2015, which I had used to gauge the current critical thinking on Ellroy and gather ideas for the book. Several of the delegates of the conference contributed chapters to The Big Somewhere. I was also able to reach out to Ellroy scholars whose work I admired such as Jim Mancall and Rodney Taveira, who had not been able to attend the conference.

As an Ellroy scholar, my previous published works include Conversations with James Ellroy and James Ellroy: Demon Dog of Crime Fiction. Writing a monograph gives an author free scope to put his own research on the page within an academic structure. Editing an anthology is, in many ways, a bigger challenge than writing a book but also a more rewarding one. First there’s direction—’what do you want the book to say collectively’? Working with a talented group of individuals with unique viewpoints, the task of the editor also includes cohesion, which happens inter-textually as well as through organisational devices like the introduction and the contents page. In the end, being an editor, I imagine is a lot like being a director, ensuring the final product is tight and carefully constructed.

The anthology is divided into four sections of critical approach. A few highlights include Jim Mancall examining the influence of Joseph Wambaugh’s novels on Ellroy’s work, Anna Flügge offering an in-depth portrait of one of Ellroy’s most enduring characters Dudley Smith and Joshua Meyer exploring Ellroy’s controversial portrayal of race issues, and in the final section Diana Powell uncovers the Ellrovian influences in Megan Abbott’s noir novels. Part of the joy of editing The Big Somewhere is that as scholarly work on the author continues to grow, it seemed like an opportune time for a book project which allowed many critical voices to be heard. My hope is that The Big Somewhere will come to be recognised by students, scholars and readers of James Ellroy as the scholarly work that made that happen. Thank you to everyone at Bloomsbury who made the book possible. 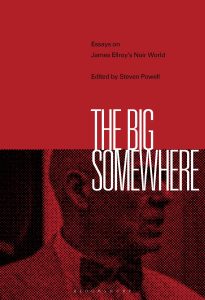 Steven Powell is an Honorary Fellow in the English Department at the University of Liverpool, UK. He is the editor of Conversations with James Ellroy (2012), 100 American Crime Writers (2012), and The Big Somewhere: Essays on James Ellroy’s Noir World, now available from Bloomsbury.