Natasha Periyan answers a few questions for us about The Politics of 1930s British Literature, her new book in the Historicizing Modernism series.

A study of how 1930s writers engaged with education as they explored shifting democratic ideals, new gender identities and new aesthetic forms.

I was intrigued by the extent to which so many writers in the 1930s were writing about education and involved in teaching. I wanted to discover what social and cultural possibilities pedagogy allowed them to explore.

In researching my MA dissertation on Virginia Woolf I was fascinated by Anna Snaith’s discussion of gender and education in her analysis of the evolution of the style of Woolf’s 1937 novel, The Years. Around this time, I also discovered the alienated and alienating prose style of Henry Green’s 1940 public-school autobiography, Pack My Bag. As I did my PhD research, it became clear that Woolf and Green’s interest in education was reflected in the work of other writers in the 1930s. I became interested by the fact that writers of the period from different parts of the literary scene were all writing about education. This included ‘middlebrow’ writers such as Vera Brittain and Winifred Holtby, members of the ‘Auden Group’ such as Stephen Spender and Auden himself, ‘inter-modernists’ such as George Orwell, and modernist and late modernist writers, such as Woolf and Green. I wanted to consider the specific ways in which these different writers engaged with education and place their ideas in conversation with one another within the same study.

It’s methodologically distinctive through the extent and range of its archival research into the educational organizations with which these writers were involved. Consideration of this material has enabled me to reach new conclusions about writers’ class and gender politics in the period and highlighted new aspects of writers’ political engagements. The book also thinks about the formal implications of writers’ teaching for their literary work in new ways: What are the consequences of education for literary language? What are the tonal implications of teaching for literary work? Through thinking about the open and interrogatory qualities of the pedagogic register, as much as teaching’s didactic register, I’ve been able to nuance critical conceptions of the tonal qualities of 1930s writing.

I was really impressed by the Historicizing Modernism list at Bloomsbury, edited by Matthew Feldman and Erik Tonning. There are so many interesting volumes within it and I felt that my study, The Politics of 1930s British Literature: Education, Class, Gender complemented its existing titles and offered a good fit with the distinctive archival approach of the series. 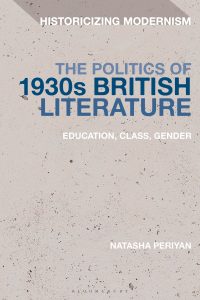 Natasha Periyan is a Postdoctoral Teaching Fellow at Goldsmiths College, University of London, UK. Her book The Politics of 1930s British Literature: Education, Class, Gender is now available from Bloomsbury.