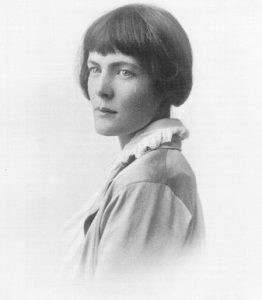 H.D. was born on September 10, 1886. To honor the 132nd anniversary of her birth, Matte Robinson explores the mysteries of her poetry.

Back in the mid-aughts, my future wife and I drove the 555 miles to the Beinecke library at Yale. I was working on my dissertation and my supervisor’s scholarly edition of H.D.’s Majic Ring. One day was devoted to reading the typed manuscript of then-unpublished The Sword Went Out to Sea, which reworked much of the material first found in Majic Ring. It was a hot day outside and Cora spent it sketching the campus’s curious architecture—the marble Book and Snake Tomb, with its Ionic style and caduceus fence, complements H.D.’s work—while I toiled in the secure reading room downstairs. Both books detail arcane, paranormal research that H.D. took part in during the 1940s, and my main goal was to jot down all the significant parallels between the two texts. I had no laptop, so I used the pencils that were provided and a plain black notebook.

Sword is ethereal enough on its own and even stranger when read with H.D.’s own little pencil emendations in a silent room full of researchers, a painting of Gertrude Stein staring down from the wall. It’s been out in print for quite a while now, so I can’t imagine anyone will go there to read that manuscript through ever again.

The notes I took were mainly about Zakenuto (I just wrote “Zak”), a mysterious entity who might have been an avatar of the coming age of Aquarius. I wrote down every instance of his appearance, as well as of  his “key-word,” a kind of code word he’d use in seances, “wings.” There were also references to the familiar double zigzagged line symbol for the sign Aquarius. H.D. even drew it into her manuscript, with her Venus pencil, and when nobody was looking I ran my finger over it, feeling the slight indentation in the paper.

That’s when I called it a day, too saturated to go on. We returned to the Graduate Club, where quite a few researchers stay during the summer months, and I bumped into a group who I recognized from the reading room. We were invited to join them, though one took the opportunity to excuse himself as we were being greeted. The friendly fellow who had invited us over introduced first Zach and then Wing. I had a private chuckle after all the notes on “Zak” and “Wings,” decided not to mention it, but then he went on “just before you arrived, we had quite a coincidence.” I was about to say, “well, so did I just now” when he continued, “you see, all of us, including the guy who just left, have the same Zodiac sign.” Yes, it was Aquarius.

For that one weird moment I felt a taste of the uncanny state that for H.D. was a home she returned to throughout her life. I had a little flash of how her mind used coincidences, and the uncanny in general, as significant finds that could point the way. Lots of people wrote on coincidences in those days. Carl Jung and Wolfgang Pauli even suggested coincidences might be clues to some non-causal connecting principle related to quantum entanglement. I don’t think that ever went anywhere, but they’re using entanglement to make unbreakable codes nowadays, I read.

H.D. had a special kind of mind. Other modernists wrote about visions, and Joyce’s work is full of uncanny coincidences, but for H.D. that was life, as it was for William Blake among the romantics. Sure, Yeats had actual visionary experiences, but he was trained in techniques for inducing them (stare at a tarot card until its reverse image is burned onto your retina. Close your eyes and turn the image into a door. Now walk through the door . . .). H.D.’s coincidences, visions, au-delà experiences came to her unbidden, often at times of trauma. Thus, they might have been experienced as dangerous symptoms, but instead, she wove them into her personal narrative through poems, novels, memoirs, and journals. She enhanced her life, and her personal myth, with them.

Something about H.D.’s resilience, her unwillingness to wall off these experiences but instead to explore and narrativize them, struck me in that moment near her archive. I felt a bit of the feverishness that must have overcome Robert Duncan as he wrote his bits and pieces of The H.D. Book. Duncan saw it too, that reality for H.D. was a little different from how it is for me and maybe you too, and the book of mine that eventually resulted came after several attempts to sketch a little of that reality through the stories implied in the archive. I wanted to write something that would be a resource to readers of her difficult poems, but I also wanted to tell something as close to true as possible about a writer who worked to put a little mystery—or maybe the Mysteries—back into the world.

Matte Robinson is Associate Professor of English at St. Thomas University, Fredericton, Canada, and author of The Astral H.D.: Occult and Religious Sources and Contexts for H.D.’s Poetry and Prose, available from Bloomsbury.