I’d describe our book as 16 instigations toward conceiving the study of creative writing outside the assumption that traditional approaches like the workshop model are inherently best practices and must be privileged. 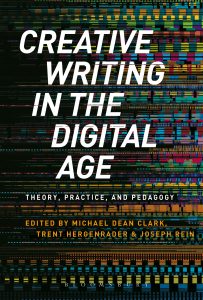 Creative Writing Innovations came to be as a result of largely the same motivations as our first collection, Creative Writing in the Digital Age: productive frustration. The genesis of Innovations can be found in a conference conversation about how difficult it is to find solid, published, research-driven scholarship on what we initially referred to colloquially as “non-narrative” approaches to teaching creative writing. What that became, however, was the desire to explore in print a wide cross-section of approaches to teaching that expanded beyond variations on the workshop theme we only heard about infrequently via conference presentations and informal networks.

I can’t speak specifically for all three of us, but I first considered the notion of teaching creative writing employing measures beyond the workshop in the early 2000s as a high school English teacher. I found that focusing on the process of writing creatively rather than the product taught the elements of story better than any other approach and built several assignments around that realization. Later in graduate school, I was introduced to the concepts of creative obstruction and restriction via movements like Dadaism, OULIPO, and networked art circuits among others. These ideas contradicted the notion that absolute artistic freedom combined with close read responses should be the default setting for the encouragement of growth in writers. In fact, in many situations that combination can be less effective than others like the ones explored in Innovations and blind to important considerations writing instructors must address in their classrooms.

Each of the chapters in Innovations operates within the framework of two implicit questions. The first is what might traditional approaches to the creative writing instruction be missing? And the second is what do approaches generally deemed non-traditional—despite their theoretical grounding and proven success—provide in practice? The results of these questions explore a spectrum of new territory, some technical and some broadly cultural or philosophical, but all with concrete, applicable examples of classroom practice. One chapter explores ways in which gender identity can be fostered as part of the academic creative writing experience rather than erased. Another considers empathy as a design guide and assessable outcome of creative writing assignments. And yet another makes a case for de-emphasizing creative writing as a product by resisting making students’ ability with Standard Written English a primary representation of the quality of their stories. Interestingly, threads of the work driving my co-editor Trent’s forthcoming book Collaborative Worldbuilding for Writers and Gamers and contributor Janelle Adist’s Toward an Inclusive Creative Writing can be seen in their chapters. From assignment sequencing to collaborative course and assignment design to dismantling the workshop model as priori, the goal of each contributor is to open up pedagogical possibilities rather than prescription.

I have always felt most comfortable studying literature from a production perspective. The choices authors make and their impact—both on the narrative and in the responses readers have to them—have always fascinated me as a consumer of stories and informed me as the writer of them. As such, Creative Writing Studies has always felt like the closest thing to an intellectual home for me because in integrates my two major concerns: how stories mean and how they are made. This view, drives what I hope my students can learn about reading literature and, eventually, making it themselves.

In reference to my last answer, my favorite Bloomsbury titles tend to be ones focused on approaches to producing and encouraging creative writing. One of the more influential books on Creative Nonfiction I’ve read is Bending Genre edited by Margot Singer and Nicole Walker. It’s a fantastic exploration of the ways in which the form exists most consistently in the spaces authors use it to reconstruct the genre’s formal expectations. I’m also partial to the textbook From Language to Creative Writing by Philip Seargeant and Bill Greenwell because it offers a number of applicable ways to think about the relationship between linguistics and story. And Creative Writing in the Community by Terry Ann Thaxton provides practical approaches to working with and thinking about contexts outside the traditional classroom where creative writing can be explored and encouraged. 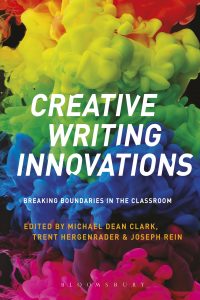 Michael Dean Clark is an associate professor of writing at Azusa Pacific University specializing in fiction, literary nonfiction, and digital literature. Co-editor, with Trent Hergenrader and Joseph Rein, of Creative Writing in the Digital Age and Creative Writing Innovations (Bloomsbury), his creative work has appeared in Pleiades, The Other Journal, Hoosier Lit, and Angel City Review among others.