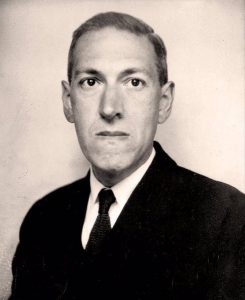 H.P. Lovecraft was born on August 20, 1890. To celebrate the 128th anniversary of his birth, Stephen Shapiro and Philip Barnard reflect on the legacy of his often controversial works.

Should one feel embarrassed about reading H.P. Lovecraft’s weird fiction? Or worse, enjoying it? Or even worse, writing commentary on it?

After decades of being categorized as sub- or para-literature, Lovecraft has become more mainstream and widely read than ever. The influence of short stories like “The Call of Cthulhu” (1928) or longer fictions like “At the Mountains of Madness” (1936) can be seen in recent mainstream films and television such as Guillermo del Toro’s Oscar-winning The Shape of Water (2018) and AMC’s The Terror (2018). Stephen King called Lovecraft “the twentieth century’s greatest practitioner of the classic horror tale.” Writers like Jeff VanderMeer, China Miéville, and Mark Fisher have championed the Lovecraftian weird as a key feature of the literary landscape. Lovecraft’s stories are now found on university syllabi in ways that would have been unimaginable even ten years ago.

Lovecraft’s tales are not without controversy, however, and their histrionic expressions of racism and xenophobia are well known. In 2015 the prestigious World Fantasy Award announced that it would no longer use a bust of Lovecraft for its trophy. WFA winners Nnedi Okorafor and Sofia Samatar expressed discomfort at having their honor associated with Lovecraft in this manner.

Samatar wrote in her blog, “I am not telling anybody not to read Lovecraft. I teach Lovecraft! I actually insist that people read him and write about him! For grades! This is not about reading an author but about using that person’s image to represent an international award honouring the work of the imagination.”

In Pentecostal Modernism: Lovecraft, Los Angeles, and World-Systems Culture, we argue that almost all of Lovecraft’s work is shaped by the memory of Atlantic slavery. This writer—whose tombstone reads “I am Providence”—produced stories that often present contorted recognition of his beloved hometown’s disgraceful profiteering from the flesh trade. Rhode Island, in particular, made more money from the slave trade than any other colony. We argue that Lovecraft’s writing belongs to a shared landscape of (American) modernism that includes Black-led Pentecostalism and its search for the grace of racial equality.

It is this tense combination of self-awareness about his prejudices and self-loathing at them that have made for a new Lovecraft reader today. As Samatar herself represents, a new generation of Black and progressive writers has taken Lovecraft’s fictional characters and cosmology, and converted them into a usable resource to cast their own light on American racism.

Black American Victor Lavalle, an accomplished new writer of weird fiction, won the 2016 Shirley Jackson award with his revision of Lovecraft’s “The Horror of Red Hook” (1927) from the perspective of a Harlem hustler in The Ballad of Black Tom. AMC has announced a television adaptation. Here it will be joined by HBO’s adaption of Matt Ruff’s Lovecraft Country (2016), with Jordan Peele (Get Out), Misha Green (Underground), J.J. Abrams, and Ben Stephenson as executive producers. Lovecraft Country is a weird fiction novel about a Black American fan of Lovecraft travelling through 1950s Jim Crow America and stumbling into a world of Lovecraft-type cults.

It is not only “writers of color” who are transforming Lovecraft for new and inventive ends. Today, Lovecraft’s fiction is often celebrated less as horror and more as camp. Contemporary images of the now-iconic alien Cthulhu aim less to cause fear than to participate in a sort of progressive community celebration. Twitter handles like #cthulhuforamerica regularly use Lovecraft to protest and lampoon American politics with posts like, ‘Thinking about Donald Trump? Don’t fall in for this ridiculous ersatz. Vote for original evil! @cthulhu4america” or “The fastest way to fix wealth inequality? Have @cthulhu4america eat the rich!”

The new readers and fans of Lovecraft probably are not the ones that Lovecraft might have wanted, but they are the ones making Lovecraft, with all his contradictions, more relevant than ever today. 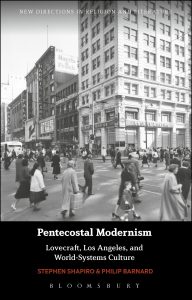 Stephen Shapiro is Professor of American Literature at the University of Warwick, UK. He is the author or editor of 11 books, including How to Read Marx’s Capital (2008) and The Wire: Race, Class, and Genre (2012). Philip Barnard is Professor of English at the University of Kansas, USA. He has published 11 books as author, editor or translator and is the Textual Editor for the Charles Brockden Brown Electronic Archive and Scholarly Editions. Their book, Pentecostal Modernism: Lovecraft, Los Angeles, and World-Systems Culture, will soon be available in paperback from Bloomsbury.