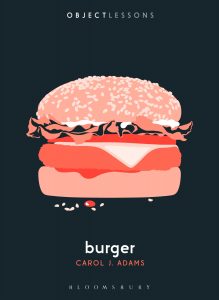 As the barbecues and grills heat up all over the country for Fourth of July, discover the origin(s) of the all-American meal with this excerpt from Carol J. Adams’ Burger from our Object Lessons series.

The history of the hamburger features a man, the Inventor, “American” of course. There he was toiling on his own, when he had a bright idea. The Edison of Fast Food, the Alexander Graham Bell of bread and animal flesh. The Edisons and the Bells consolidated their inventions through patents. Not so in the history of the hamburger. The Inventor is followed by the Innovator, who improves the product, who himself is followed by the capitalist, that is, the franchiser. The franchiser grasped the potential of the improvement, and goes into business with the innovator (or buys him out) becoming the capitalist par excellence by anticipating and shaping the consumers’ desires. The franchiser would not be surprised that our language about wealth derives from cows. “The Roman scholar Varro Retains (116–27 BC) explained Omnis pecuniae pecus fundamentum (‘for cattle are the origin of all money’—the Latin word for wealth, pecunia, comes from the word for cattle, pecus). The term ‘cattle’ is derived from the Middle English and Old Northern French catel, the late Latin captale and the Latin capital, meaning ‘capital’ in the sense of chattel or chief property.”[1]

The title of “first” has been asserted for inventors whose hamburger epiphanies occurred at a county fair or a lunch truck or a diner in Texas or New Haven. It is a national story, but also a local one. Take, for instance, “Hamburger Charlie”—Charles R. Nagreen—toiling at the Outagamie County Fair in Seymour, Wisconsin in October 1885. When people complained about greasy hands, Nagreen flattened meatballs between two pieces of bread. Seymour, Wisconsin, boasts that it is the “Home of the Hamburger.” Or was it the Menches family, not in Wisconsin but western New York? In 1885, Frank, Charles, and Robert Menches, brothers and a nephew, took their food truck to the Buffalo Fair held in Hamburg. (You can see where this is leading.) Frank groundup sausage and they sold it as “a cooked meat patty” naming it hamburger. Or did this happen at the Summit County Fair in Ohio?[2]

Like hamburgers, county fairs are iconic “American” institutions recalling and enacting “American” values. Toward the end of the nineteenth century, the county fair underwent “a period of radical readjustment.” [3] For one, the number and kinds of amusements expanded (games of chance, horse racing rather than “speed trials,” evening performances, carnivals). It was a time when agriculture became more mechanized, and fairs offered opportunities to see new machinery for farming. Fairs also became known as places with “interesting food that you can’t get at home.”[4]

Or the hamburger was born at a “lunch wagon.” The lunch wagon could be set up outside of factories, and the hamburger’s cheapness assured it became the workingman’s friend. Claims are made for Louis’ Lunch in New Haven as the inventor of the hamburger sandwich on white bread. In 1900, or so we are told, Louis Lassen was asked to serve a gentleman in a hurry so he put “ground steak trimmings between two slices of toast.”[5]  In 1974, Louis’ Lunch was threatened with being bulldozed for development in New Haven, garnering New York Times coverage as “‘Burger’ birthplace”—though the quotation marks around “burger” suggested the Times questioned the claim.[6]

Still, such a claim from New Haven did not sit well with Texas businessman and Dallas Cowboys founder Clint Murchison, Jr., who supposedly said, “If we let the Yankees get away claiming the invention of hamburgers, they’ll be going after chili next.” Murchison argued that it was Fletcher Davis from Athens, Texas, slinging hamburgers at a lunch counter set up on the courthouse square, who invented the hamburger.[7] Was it Davis who popularized this new food at the 1904 St. Louis World’s Fair? Another supposed birthplace, the 1904 Fair popularized many foods: condensed milk, kumquats, ice cream cones, the hot dog, and the hamburger.

If not a fair or a lunch counter, the “American”-born hamburger is linked with other aspects of Americana. In 1891, Oscar Weber Bilby built a grill in Tulsa, Oklahoma, and prepared patties from cow flesh served between homemade sourdough buns made by his wife. Hundred people enjoyed this “first” hamburger.[8] The day? The fourth of July.

In the debate about whether the hamburger originated in western New York, Connecticut, Wisconsin, Ohio, Oklahoma, or Texas—claims often built on unsubstantiated assertions and/or proud family members’ testimony—one point is clear: Somewhere in the United States the hamburger was born. The quarrel about where in the United States this happened serves to confirm its “American-ness.” Though different claimants exist for creator of the hamburger, “American” ingenuity was the real father of the burger.

Carol J. Adams is the author of numerous books, including the seminal The Sexual Politics of Meat and Neither Man nor Beast. She is the editor of Ecofeminism (co-edited with Lori Gruen, 2014) and The Carol J. Adams Reader (2016). All are available from Bloomsbury. 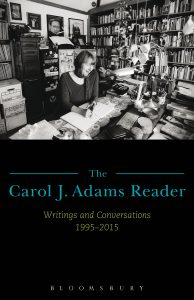 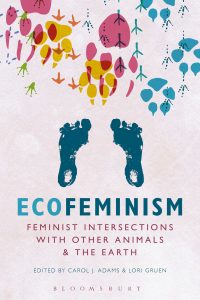 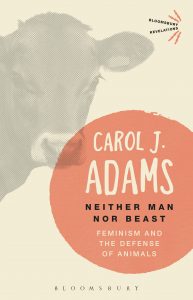 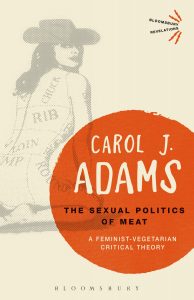