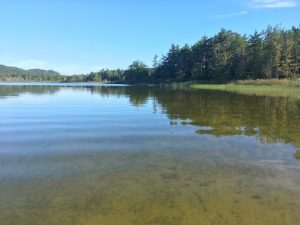 I wrote a good portion of The Work of Literature in an Age of Post-Truth when I was up in Michigan in 2016-2017, on sabbatical from my full-time teaching position. I’m back up here now for a few weeks, recharging in anticipation of the academic year ahead. Something about the green green light of the woods in July sparks new writing ideas, and the intricate shorelines give me perspective to plan my upcoming courses.

This summer we had friends visit from New Orleans. “So, is this Hemingway country?” asked one friend. I went into a rambling explanation of how Hemingway’s Michigan stories really pepper this region, some taking place in actual towns while others sketch more generic villages and landscapes. The feelings and ambience are both specific (historically and geographically) and also sometimes vague—yet eerily familiar even when Hemingway wasn’t writing about exactly here or there. But I find it awkward to even talk about Hemingway with all the TRUMP-PENCE stickers still smugly peeling off trucks and minivans, two years later. There is an uncomfortable line to be drawn between the imagined tough authentic character of Hemingway and the cocky toxic vibe of Republican leadership today. Even if Ernest Hemingway himself would have seen right through (and exposed in writing) the fascistic machinations of Trump and his minions, it still seems off the mark to overly contemplate (much less revere) this problematic author, these days. I’m not suggesting we simply erase Hemingway from the canon. But we need to put his writing and life into fresh context—particularly given the trajectory that brings us into the fraught American present. And there are more compelling authors to explore, too: contemporary as well as voices muted from the past.

Driving through the county one frigid winter day in early 2017, I noticed a changeable roadside signboard that just after the election had enthusiastically declared, “NOW DRAIN THE SWAMP!” But the sign had lost many of its letters over the ensuing months, and so read     N    W       R   IN       H        AM     —the missing letters and the exclamation mark lay askew at the bottom of the sign, sticking out of dirty snow. Trump more or less abandoned his “drain the swamp” slogan after the inauguration, one more easily shed campaign festoon. But of course it still reverberates across various agencies, most ominously through the EPA as well as actual public lands, indicating just how wrong the tracks are that Trump is hurtling the country perilously down. In my new book I explore swamps as places worth treating not with scorn or irony but rather with utmost respect—democratic and educational mires as well as actual wetlands. Far better to embrace these squishy zones than to wage war on them as hyperbolic amorphous enemies. Swamps are an object correlative of the inescapable realities of life on Earth: complex networks that make human progress (as well as our missteps) possible in the first place. Nothing to simply drain or merely metaphor away, the swamp both stands for and is a vital reminder of the importance of delicate, intricate ecosystems—and our equally tenuous, ongoing place in them.

This fall at Loyola I’m teaching Mary Shelley’s Frankenstein in my class for first-year English majors. We’re going to read the book slowly: a few pages each week. I’ve done this in the past with F. Scott Fitzgerald’s The Great Gatsby, and this year I wanted to try it with a different book. I highly recommend this, even if it sounds ludicrous: read a novel unhurriedly with your students, lingering on single paragraphs, sentences, words. As smartphone alerting and social media mewing only ramps up, to go relatively glacially slow across a book—and individual pages—feels subversive and can be incredibly rewarding. But beyond being merely a sort of recalcitrant method, what can Frankenstein, 200 years after its inception, teach us in 2018 about science, exploration, desire, and storytelling? What will reading this novel slowly—almost painfully slowly—reveal about its textures and flexions, about the individual drive of Victor Frankenstein, or of Robert Walton? And what will it reveal about us, contemporary readers and writers? 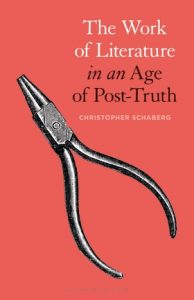 Much of my new book records my observations and findings after 15 years or so of teaching literature at the college level in the early 21st century. At times it felt indulgent to put this book together, to navel gaze at the already navel gazing activity of literary criticism. The upshot of writing about teaching literature is that it has caused me to be more attuned to the ways that my teaching inflects my writing, and vice versa. And where everyday life spills into the classroom, and into my writing. I suppose that sounds rather obvious. But in these splintering political times I think we need to be conscious of and conscientious about how our myriad creative and consumptive practices mutually shape one another. And dragging against the relentless acceleration of social media feeds, I tried to do this in the form of a book. So The Work of Literature in an Age of Post-Truth asks questions about the work of literature, about specific works of literature, and how liberal arts education and literary studies might help us focus on and navigate through the miasma of this unsettling, unsettled moment. 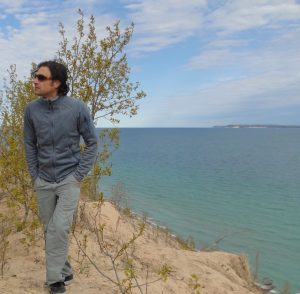 Christopher Schaberg is Dorothy Harrell Brown Distinguished Professor of English at Loyola University New Orleans, USA. He is the author of The Textual Life of Airports: Reading the Culture of Flight (2013), The End of Airports (2015) and Airportness: The Nature of Flight (2017), and co-editor of Deconstructing Brad Pitt (2014). He is series co-editor (with Ian Bogost) of Bloomsbury’s Object Lessons. His latest book, The Work of Literature in an Age of Post-Truth, is now available from Bloomsbury.