Clint Burnham answered a few questions for us about his new book in the Psychoanalytic Horizons series, Does the Internet Have an Unconscious?

We can only understand the internet by thinking about it psychoanalytically: in terms of our desires, anxieties, enjoyment, and repression.

I wanted to see what psychoanalysis, and the work of Slavoj Zizek in particular, could bring to thinking about digital culture. Rather than questions of code, or Big Data, or interfaces, it seemed to me that concepts of the unconscious, or negation, or narcissism, could help us to understand our everyday interactions: selfies, social media, scrolling through images on our phone.

I drew on Zizek’s work for my dissertation, published in 1995 as The Political Unconscious. Since 2007 I have been a member of Vancouver’s Lacan Salon, which informed many of my ideas about psychoanalysis. And while I was on social media for a while, I withdrew from twitter and facebook in the fall of 2015, leading me to wonder why?

Most psychoanalytic cultural critics talk about literature, politics, or film; conversely, most discussions of the digital either draw on media studies or affect theory. My book is the first study to talk about digital culture – from social media to the infrastructure, but including its representations in movies (Her), television (Black Mirror), hiphop (Frank Ocean, Childish Gambino), and literature (Tao Lin) – in terms of the corpus of Zizekian-Lacanian theory.

Mari Ruti, who is one of the editors of the Psychoanalytic Horizons series, was interested in my project – and I have tremendous respect for her critical acumen, her feminist politics, and theoretical prowess. Too, I published a book on Fredric Jameson and The Wolf of Wall Street with Bloomsbury in 2016 so I knew and respected the professionalism of the press’s editorial and production teams.

Well, from Bloomsbury – Zizek’s Disparities, Todd McGowan’s Psychoanalytic Film Theory and The Rules of the Game, because they taught me so much about something I thought I already understood. It’s very traumatic to realize you need to keep learning. 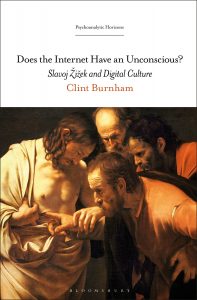 Clint Burnham is Professor of English at Simon Fraser University, Canada, where he also teaches theory and popular culture. His books include The Jamesonian Unconscious: The Aesthetics of Marxist Theory (1995), The Only Poetry that Matters: Reading the Kootenay School of Writing (2011), and the collections Digital Natives (2011, co-ed. with Lorna Brown) and From Text to Txting: New Media in the Classroom (2012, co-ed. with Paul Budra). His latest book, Does the Internet Have an Unconscious?, is now available from Bloomsbury’s Psychoanalytic Horizons series.