Guest post by Sean Prentiss and Joe Wilkins, adapted from Environmental and Nature Writing: A Writer’s Guide and Anthology

There’s a wicked myth about environmental writing (or any creative writing, really): that the great writer ascend the mountain to wait for inspiration to strike. Once it does strike, the writer simply transcribes that revelation verbatim, and then brings the beautiful essay, poem, or story back to the rest of us, offering us their wisdom.

That myth isn’t true. Not even close.

No less a writer than Susan Sontag tells us, “What I write is smarter than I am. Because I can rewrite it.” Or, if you’re not yet convinced, let’s try Ernest Hemingway, who famously declared, “The first draft of anything is shit.”

Hemingway is correct. Our first drafts are almost never our best drafts, which is why all writing is rewriting. Writing is revision, which is where a writer re-envisions the piece they are working on—re-sees how it is written, arranged, and layered. Though some initial drafts may be closer to their final form than others, no essay, poem, or story simply arrives. It is developed, re-routed, worked over, worried about, rearranged, recast, trimmed, expanded, shifted, tightened, deepened, distilled—and in the hours and days and years it takes the author to shape the essay, poem, or story (or even this blog, which comes from a chapter of Environmental and Nature Writing: A Writer’s Guide and Anthology, which has gone through at least six major revisions plus another ten smaller ones), the author finally discovers that she can say something wiser and more beautiful than she ever thought she could say. That’s the power of rewriting, of the writing process, of revising. And from the instigating moment or image to large structural concerns, such as genre, voice, and point of view, and on to those final distillations of language, tightening the rhythm of a scene or sentence, writing is indeed a process.

Becoming a writer is a process as well. You don’t have to pay any union dues, and there’s no secret handshake; rather, like any competitive mountain biker or birdwatcher, you listen and watch and learn, you practice, you gain skills, and, slowly, you get better. The novelist Ron Carlson says it this way: “The writer is the person who stays in the room,” meaning that the person who becomes the published author is the one willing to keep writing. And it’s true; the writer is the one who despite setbacks and failures continues to keep writing, continues to tinker and improve and revise.

While understanding writing (and becoming a writer) as a practice may be disappointing for those who were hoping to be anointed as writers, for the rest of us, it is empowering: we don’t have to be perfect right away, we can write messy first drafts (and second, third, fourth, and fifth drafts!), we can—with hard work and patience—turn those messy early drafts into wise final drafts, we can improve our practice as writers, and we can call ourselves—as long as we keep writing—writers, even if it takes us months to construct an essay or years and years to publish a book. 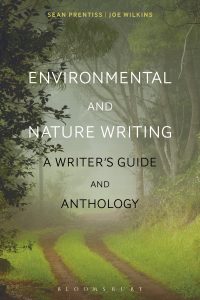 Sean Prentiss is Associate Professor of English at Norwich University, USA. He is author of Finding Abbey: The Search for Edward Abbey and His Hidden Desert Grave (2015), which won the National Outdoor Book Award for Biography/History. He is also co-editor of The Far Edges of the Fourth Genre (2014). Joe Wilkins is Associate Professor of English at Linfield College, USA. His memoir, The Mountain and the Fathers: Growing Up on the Big Dry won the GLCA New Writers Award for non-fiction and his work has appeared in Georgia Review, Harvard Review and Slate among many other periodicals. Their book Environmental and Nature Writing: A Writer’s Guide and Anthology is available from Bloomsbury.