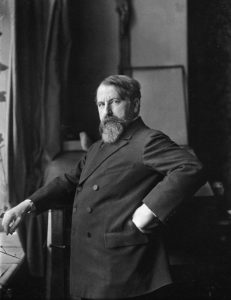 Arthur Schnitzler was born on this day in 1862. Arguably the most central figure of Viennese Modernism, Schnitzler is known for his sharp analytical gaze on the Austrian society and its bourgeois norms and conventions. On his 60th birthday in 1922, thus precisely 96 years ago today, no other than the founding father of psychoanalysis Sigmund Freud wrote him a letter which has now become one of the most often cited documents in the field of Austrian Studies. In this piece of writing, Freud admits to a so-called ‘doppelganger anxiety’ he felt towards the other man. “I have gained the impression”, Freud wrote, “that you have learnt through intuition – though actually as a result of sensitive introspection – everything that I have had to unearth by laborious work on other persons.” And indeed, we find in Freud’s texts several references to Schnitzler’s work as literary illustrations for his psychoanalytic theories. A medical doctor himself, Schnitzler remained skeptical about some of the key assumptions of psychoanalysis. However, his writings have been read as literary case studies that subtly illuminate the complex pitfall of human relationships.

In my new book Stereotype and Destiny in Arthur Schnitzler’s Prose: Five Psycho-Sociological Readings, I show that stereotype and destiny serve as an interrelated coping mechanism for a central psychological conflict of modernity: the paradoxical need to be recognized as ‘normal’ and ‘special’ at the same time. Thus, the need to feel assured at once of one’s position within the social community and at the same time of one’s individuality. This can lead to paradoxical impulses, because it implies that a desire to conform to social norms exists alongside the desire to exceed those norms. In a conversation with a friend, I once came to describe this conflict as ‘Everyone wants to be special, but no one wants to be labeled as the freak’.

The conceptual link between the idea of a higher of power of destiny and the practice of social stereotyping in Schnitzler’s prose has not been explored elsewhere. The recognition of this link allows me to approach Schnitzler’s prose from a new angle: while Vienna has been established as a site of crisis in scholarship, my book focuses on the presence of forces that deny the existence of said crisis and work to contain its subversive and critical potential. Stereotype and destiny emerge in Schnitzler’s prose texts as a form of these counter-critical forces. My book therefore combines socio-historical and psychological interests with aesthetic and philosophical concerns in Schnitzler’s prose. I also hope that my readings show that Schnitzler’s texts can invite us to reflect on the cultural narratives that prevail in our own culture: we may ask whom of us these narratives exclude and stereotype in order to grant some of us the privilege of feeling normal and special at the same time.

Marie Kolkenbrock is Research Associate and Affiliated Lecturer in the Department of German and Dutch at the University of Cambridge, UK. She is also Researcher at the Ludwig Boltzmann Institute for the History and Theory of Biography in Vienna, Austria, and Postdoctoral By-Fellow at Churchill College, Cambridge, UK. Her book Stereotype and Destiny in Arthur Schnitzler’s Prose is now available from Bloomsbury.