On Friday, April 20, 2018, James Joyce and Absolute Music received its official launch in Basel at the Labyrinth Book Shop, where it was greeted with a Q&A and wine reception, followed by a cocktail party at the local bar, L’Unique. 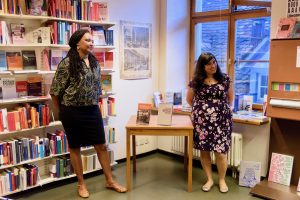 The evening began with a co-launch Q&A at the Labyrinth Book Shop, an independent bookstore located in the heart of the Basel Old Town. Here two authors introduced their first academic monographs —Michelle Witen (me) with James Joyce and Absolute Music (Bloomsbury 2018) and Cassandra Thiesen-Mark with Mediators, Contract Men, and Colonial Capital (University of Rochester Press 2018) — to the public and fielded questions about their research and writing processes as well as the nature of their contributions to their fields. This was followed by a wine reception and a book signing for those who wanted to purchase copies of these books on the evening. Afterwards, guests were invited to join the authors at L’Unique for hors d’oeuvres and cocktails. In honour of the achievement, the bar generously offered to name cocktails after the two books that were being launched that evening, provided the authors would be willing to concoct the recipe for the cocktail.

…And thus, began the inception of the cocktail, “Absolute Joyce.”

Naturally, this was a highly scientific process that incorporated the full spectrum empirical methods, including research on the state of the field, a working hypothesis, methodical experimentation, and adjustments to the chemical compound, until the final result was, well, absolute. I began by contacting Joycean friends for ideas about how one might go about creating a cocktail that was representative of James Joyce’s works. I had already covered the “absolute music” aspect of my monograph by deciding to use Absolut Vodka in the mix. I received some splendid suggestions, from repurposed references to Joyce’s Portrait of the Artist as a Young Man, Ulysses and Finnegans Wake — such as a “Scrotumtightening Sea Breeze” (Chrissie Van Mierlo), “Baby Tuckila” (Tamara Radak), “Solo Sex on the Beach” (Cleo Hanaway-Oakley), and the “White Russian [General]” (James Fraser); to metaphorical cocktails, such as the “Barney Kiernan special”: “it’s basically a pint of Guinness but you also get a sinking feeling you’re about to have your head kicked in by a xenophobe” (Liam Lanigan); to Joyce’s favourite Swiss wine subtitled as “Chamber Music” (James Fraser); to the suggestion of using the recently launched “James Joyce Gin” (Katherine Ebury); to classics like “Black Velvet” (Paul Fagan). At last, after some online searching, I eventually hit upon the already existing “James Joyce Cocktail” (also suggested by Paul Fagan and Michael Berger), consisting of Irish whiskey, Sweet Vermouth, Cointreau, and lime juice, and decided to use it as my foundation.

Next came the testing process: obnoxiously asking the bartender to make the drink recipe I had brought with me, I swapped the whiskey for Absolut Vodka in the same proportions as the original cocktail. This tasted awful. Over the course of the next two weeks, I made several adjustments to the cocktail, including adding Sprite as a mixer, adding Prosecco to give it some fizz, and significantly adjusting the parts of the spirits. Eventually, a very helpful bartender at Café des Arts, Giovanni Di Brizzi, helped to adjust the recipe into something Sirens-worthy. This involved: 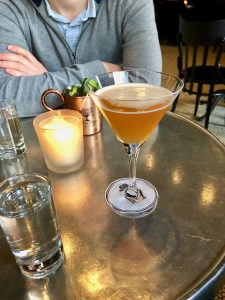 It was truly delicious. 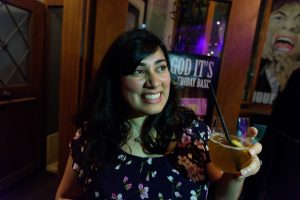 Unfortunately, L’Unique did not carry Gran Classico. Campari, also an orange bitter, was suggested as a substitute, but I had already learned from “bitter” experience that the cocktail needed the sweetness of the Gran Classico for balance. Instead, I concocted a variation without it that was supposed to include either Sprite or Prosecco as a mixer (the only difference in the abovementioned recipe), depending on the imbiber’s preference. I’m not sure what happened, but when the cocktail was served at the bar, there was no mixer involved. As a result, it strongly resembled an incredibly strong martini. This was fine, but one certainly had to moderate one’s intake! The next day, many guests had nicknamed the cocktail “Absolute Hangover” rather than “Absolute Joyce,” which, as far as I was concerned, was rather apt.

All in all, it was a delightful evening and I was very glad to have had this opportunity to acknowledge the support and encouragement of family, friends, colleagues, and students, many of whom have been with me throughout the writing process. Furthermore, it was wonderful to see so many smiling faces present to witness the advent of James Joyce and Absolute Music. 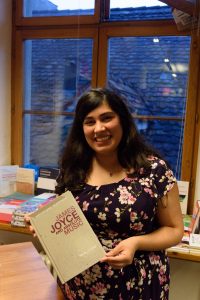 Michelle Witen is Postdoctoral Teaching and Research Fellow at the University of Basel, Switzerland. Her book James Joyce and Absolute Music is now available from Bloomsbury.