Through five psycho-sociological readings, my book shows how Arthur Schnitzler’s prose texts suggest that stereotype and destiny form a composite coping mechanism for a central conflict of modernity: how to be normal and special at the same time.

I found that Schnitzler’s texts, while aesthetically satisfying, tend to leave something like an indigestible remainder: this remainder makes us aware of the constructed nature of the narratives that make up the fabric of social reality. Schnitzler’s prose thus offers crucial insights in the intricate ways social power structures work in Vienna at the beginning of the twentieth century.

I first started looking at Schnitzler as early as during my MA’s degree, when I spent an Erasmus semester at Cambridge in 2009: I had the opportunity to work on his Traumnovelle (Dream Story), using his drafts kept in the archive of the University Library. Like I said, there was that indigestible remainder in his work, which made me apply for a Gates Cambridge Scholarship, so I could chew on it a bit longer during the course of my PhD.

The conceptual link between the idea of a higher of power of destiny and the practice of social stereotyping in Schnitzler’s prose has not been explored elsewhere. The recognition of this link allows me to approach Schnitzler’s prose from a new angle: while Vienna has been established as a site of crisis in scholarship, my book focuses on the presence of forces that deny the existence of said crisis and work to contain its subversive and critical potential. Stereotype and destiny emerge in Schnitzler’s prose texts as a form of these counter-critical forces. My book therefore combines socio-historical interests with aesthetic and philosophical concerns in Schnitzler’s texts. I also hope that my readings show that Schnitzler’s texts can invite us to reflect on the cultural narratives that prevail in our own culture: we may ask whom of us these narratives exclude and stereotype in order to grant some of us the privilege of feeling normal and special at the same time.

Studying literature can provide us with tools that help us to ‘read’ culture by which I mean becoming aware of the narratives that legitimize the various positions within the power structures of a social order. Of course, reading literature is about much more than that, and it would also be delusional to deny that literary criticism participates in those processes of legitimization.  But I think there is this moment of recognition that most liberal arts students experience at some point during their studies: when you realize how normative ideas are being reproduced, but also undermined and challenged, through their aesthetic representation in works of literature and culture. I think for me, it was that moment which drew me to Literary Studies.

Annie Ring’s After the Stasi is impressive in its scope and methodology, combining close readings of literary texts and life writing, archival sources, and theories of subjectivity. What struck me as particularly crucial was the fact that Ring’s readings help us understand the forms of complicity that prevail in our own post-1989 culture. I also found Silke-Maria Weineck’s The Tragedy of Fatherhood extremely illuminating in the way it unpacks a wide range of conceptualizations of paternity and thereby offers important insights into the symbolic and political construction of power in the West. 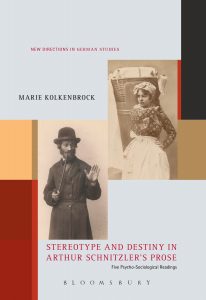 Marie Kolkenbrock is Research Associate and Affiliated Lecturer in the Department of German and Dutch at the University of Cambridge, UK. She is also Researcher at the Ludwig Boltzmann Institute for the History and Theory of Biography in Vienna, Austria, and Postdoctoral By-Fellow at Churchill College, Cambridge, UK. She is the author of Stereotype and Destiny in Arthur Schnitzler’s Prose: Five Psycho-Sociological Readings, now available from Bloomsbury.