Although Vladimir Nabokov’s birth in 1899 on April 10 (‘Old Style’) translated to April 22 (‘New Style’) when Russia transitioned between the Julian and Gregorian calendars, the ‘New Style’ also dropped certain days. Hence, Nabokov’s first birthday was actually celebrated on April 23 (which meant getting to share his special day with Shakespeare rather than Lenin…). To celebrate his birthday, and accompany the publication of his new monograph, Nabokov and Nietzsche: Problems and Perspectives, Michael Rodgers reveals how he discovered Nabokov’s writing and where it has taken him. 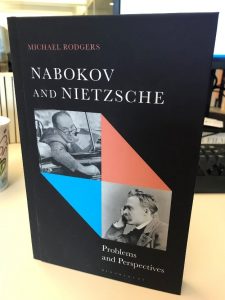 I discovered Vladimir Nabokov’s writing through what I like to think was serendipity – a class, devoted solely to Nabokov, was offered as an Honours option at the University of Strathclyde in 2006.

Here was a Russian writer, writing in English, who was making me reach for a dictionary on almost every page (‘bombinate’, anyone?). Who was playing tricks on his readers (the dedicatee of his novella Invitation to a Beheading doesn’t exist, despite him having birth and death dates…). Who was placing puzzles inside his texts (the last paragraph of his short story ‘The Vane Sisters’ reveals a secret message when read acrostically). Who was telling me what answers I’d already chosen in a quiz he’d put together (Lectures on Literature). I’d never come across literature quite like it. Or, indeed, a life quite as bizarre: tri-lingual by five; a synaesthete; having to flee from both Bolsheviks and Nazis; paying for his Cambridge admission with family jewels; the assassination of his father; becoming a lepidopterist at Harvard; never owning a house in his life; his son becoming both a racecar driver and opera singer; his final novel posthumously published against his wishes having been in a Swiss bank vault for thirty years.

I decided to look at Nabokov’s writing in more depth – firstly as the subject of my MLitt thesis (arguing that Invitation to a Beheading exhibits magical realist characteristics before the genre was properly conceived), and then for my PhD. I was fortunate enough to travel to St Petersburg in the first year of doctoral study in order to give my first academic paper (in Nabokov’s house, no less!) and rub shoulders with academics whose work I’d been reading for some time. 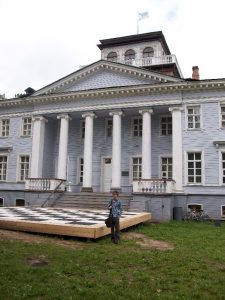 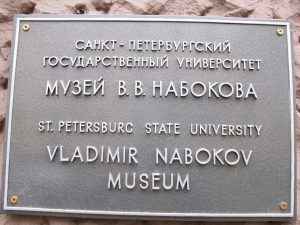 More talks followed, mostly across the UK, as did my own conference in Glasgow in 2011, with Professor Michael Wood acting as my keynote speaker (a bottle of whisky, and a special card I had bought in Nabokov’s house, made their way to Princeton as way of thanks). The conference led to an edited collection with Palgrave in 2016, with Professor Susan Elizabeth Sweeney, who also came to Glasgow, acting as my co-editor. 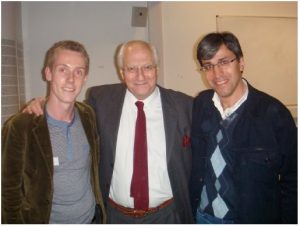 The serendipity continued. I was fortunate enough to meet Nabokov’s relative, Ivan Nabokov – son of the composer, Nicholas Nabokov – when at a conference in Biarritz. This led to an invitation from Ivan, and his wife Claude, to come to their home in Paris. It was a surreal experience not only meeting a blood relative of the man who I’d devoted nearly a decade to, but also hearing Ivan’s stories about being the first French publisher to risk publishing Salman Rushdie’s Satanic Verses and his father’s friendship with Stravinsky. Funnily enough, a good few nips of whisky were had that day too… 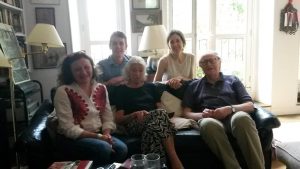 I’m delighted to finally see my book on Nabokov and Nietzsche coming out with Bloomsbury this month. Perhaps the most special thing for me was getting to give the dedicatee a copy of the book in person: my high school English teacher, Dr John Burns. He gave me his own gift in return… 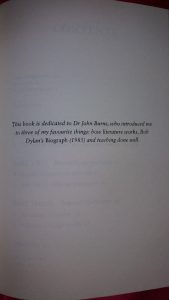 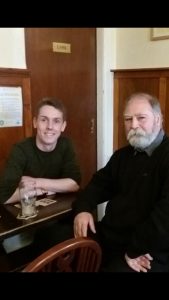 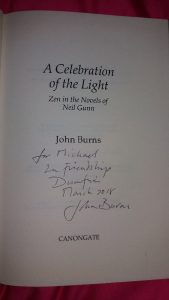 I’m now working on a new area of research (humour in modernist writing), although Nabokov’s work will still be featuring. More specifically, I’m interested in how ‘uncomfortable’ humour is evoked in phrases like Humbert Humbert’s in Lolita: ‘my very photogenic mother died in a freak accident (picnic, lightning) when I was three’. Although there are other aspects of literature that I want to focus on, I’ve no doubt that Nabokov’s work will continue to feature in one way or another.

Michael Rodgers is Associate Lecturer in English Literature at the Open University, UK. He is co-editor, with Susan Elizabeth Sweeney, of Nabokov and the Question of Morality: Aesthetics, Metaphysics and the Ethics of Fiction (2016). His new book, Nabokov and Nietzsche: Problems and Perspectives, is now available from Bloomsbury.