Leslie Marmon Silko was born on March 5, 1948. To celebrate the 70th birthday of one of the most important and influential contemporary Native American writers, David L. Moore reflects on her role in bringing attention to Indigenous culture.

Silko was one of the first modern literary voices to call attention to white shamanism, in “An Old-Time Indian Attack Conducted in Two Parts: Part One: Imitation ‘Indian’ Poems; Part Two: Gary Snyder’s Turtle Island” (1978).  Her critique of non-Indigenous artists who assume they can comprehend and “grasp”  Indigenous consciousness remains one of the most compelling expressions of decolonization.  Yet Silko is also one of the major voices inviting readers worldwide to investigate Indigenous life and thought.  She even hints, in Almanac’s “disappearance of all things European” that the American land and its Indigenous peoples may eventually transform EuroAmericans into something that the land and its spirits would love.

Somewhere within and between those clear warnings there’s a middle road of equity and justice, as well as communication and understanding.  I’ve tried to map that road in various publications (listed below).  Here are a few more musings.

In today’s contested context of cultural appropriation, where well-meaning settler colonialists, and Europeans, and others around the globe “imitate” Indigenous life ways, what is that subtle—or not so subtle—difference in perception that separates those who do not carry white privilege and those who do?

There are so many factors, historical and cultural, in so many variations, but I do think that “respect” is central.

Respect comes from paying attention, “re-specting,” re-examining, re-looking, at a situation that may be either dangerous or beneficial.  Respect also means acknowledging the reflection, the gaze looking back at you.  You know you are being seen as well.

Colonial history sets up that need for attention to infinite dangers and benefits, respectively, for people of color and for whites.  I am not mystifying those differences when I suggest that a key element grows not only from those different colonial pressures to pay attention, but also from deep precolonial cultural differences.  Those differences have been key players in the brutalities of our past, and they may be a key to surviving our future.  They are deeply woven in Silko’s critique of “all things European”—even as those differences play out in daily discourse in Indian Country in countless jokes and quips about “that’s so white!”

Many scholars and writers, Indigenous and non-, have pointed to “kinship” and “balance” as fundamental Indigenous values, in contrast to material and individual values of EuroAmerican—and urban—cultural values.  Publications proliferate.

Kinship is neither sentimental nor romantic.  A sense of kinship and interconnection can very practically take the form of making strategic allies in the human and nonhuman worlds.  Disregard for interconnection can have devastating consequences, as history and ecology testify.

Yet a further gift of Indigenous living is not merely this widely noted understanding of interconnection, though that sense of kinship is profound.  For all the crucial importance of kinship, the substance of this gift is recognizing—and respecting—a presence of consciousness throughout that kinship system that links us all, for good or ill.  Recognizing this animating presence has even more direct and compelling repercussions than the natural and cultural fact of interconnection itself.  The force of the language of “spirit” gestures at such significance.  “Animism” is a word in recovery, no longer conveying “witch-doctor” projections by patronizing ethnologists; rather “animism” is embraced by some contemporary Indigenous writers (see, for instance, Ray Young Bear, Meskwaki poet and novelist) who see in that latinate English term an echo of their ancient traditional views of respect for life in the human and the more-than-human world.

The recognition of animate consciousness reads a different sense of cause and effect animating the interconnections.  The systems of nature and culture, woven by varying levels of sensate awareness and conscious purpose, are thus not a set of machines turning on themselves automatically, nor predictably.  The world is not a random collection of objects, large and small, infinite and infinitesimal, interrelating merely by “objective” law.  Instead it is a vast, supple, changing web of subjects exercising their diverse consciousness, moving always in surprising ways, all responding to inconceivably larger—or higher or lower—consciousness immanently and endlessly creating possibility.  That becomes a different “natural law.”

This gift of respect is one answer to the question of what is different between predominant EuroAmerican and Indigenous world views.  Recognizing attention to animate consciousness addresses Indigenous reasons for fundamental respect and for attentive caution.  Such respect often becomes a reason for courtesy.  Such courtesy may prompt a reticence to make claims on or about the world (a discretion oft’ mistaken as “stoicism”).  Yet such respect triggers humor as well—by insisting that the target of humor can take the tease.  Such respect stands in contrast to EuroAmerican discourses that pre-emptively assert claims (in both rhetorical and geographical senses of the word) and that patronize by giving directions before listening.  (Again, “. . . that is so white,” remains a phrase in Indian Country to characterize such mental reflexes and assertive assumptions that would speak before respectful listening.)

Today’s citizens of conscience may learn to apply this cultural gift of animism to countless circumstances.

Some of my work that deals with cultural appropriation either directly or indirectly:

“That Dream Shall Have a Name”: Native Americans Rewriting America. Nebraska UP, 2013. 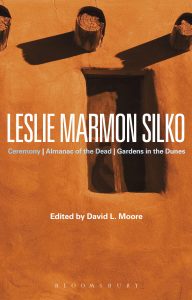 David L. Moore is Professor in the Department of English at the University of Montana, USA. He is the author of ‘That Dream Shall Have a Name’: Native Americans Rewriting America (2013) and the editor of Leslie Marmon Silko: Ceremony, Almanac of the Dead, Gardens in the Dunes (Bloomsbury, 2016).