David Foster Wallace was born on February 21, 1962. To honor the 56th anniversary of his birth and to reflect on his legacy, David Hering discusses the current debates surrounding Wallace’s work.

It has now been a decade since the death of David Foster Wallace. In the last ten years, Wallace scholars and readers have seen huge changes in the discourse around his work. There have been numerous articles, books and posthumous publications. In the wake of these publications, the critical conversation has developed substantially, and the earlier criticism – which by necessity called for an understanding of Wallace’s place in the American canon – has been followed by work that investigates the more difficult and controversial elements of Wallace’s writing and life.

With that in mind, I’ve been thinking a lot recently about David Foster Wallace and misogyny. In 2015, Molly Fischer’s article ‘Why Literary Chauvinists Love David Foster Wallace’ sought to understand why Wallace’s work “has become lit-bro shorthand”, his literary status increasingly relegated to “a clamoring among men for one another’s esteem”. This was followed by Amy Hungerford’s refusal to read Wallace, outlined in her book Making Literature Now, on account of biographical instances of certain troubling relationships with women. More recently ‘Men Recommend David Foster Wallace to Me’, Deirdre Coyle’s essay on her traumatic experiences with male Wallace readers, caused a social media storm – and, with wearying predictability, a series of disgraceful ad hominem attacks on Coyle. An article in The Guardian, ‘Can Male Writers Avoid Misogyny?’, seemed to seal the deal, describing Wallace as “the mascot for a new generation of male narcissists”. In a moment when questions of sexual harassment and coercion have been rightly brought into public scrutiny in an unprecedented fashion, how can we talk most productively about Wallace and misogyny?

I’m a man who has read, re-read and written extensively on Wallace, and these articles have troubled me and caused no small soul searching about my position as a reader and scholar of his work. I’ve recommended Wallace to people numerous times (I rarely recommend Infinite Jest for the same reason I wouldn’t recommend any other 1000+ page book – it feels anti-social). Did I see myself in –  God forbid – the “male acquaintance with a man-bun” in Fischer’s article? Coyle’s grim stories of male coerciveness must be listened to, as should any account of insidious misogyny – to speak of it is to expose it and to give us the tools to work against it together. It concerns me, though, that public discourse around Wallace’s work is beginning to circle increasingly around a fairly broad connection between the writing and misogyny, and indeed between the process of readerly recommendation, which I prize, and male sexual coercion. To be clear, I’m not disputing the importance of the experiences of these writers. I do, however, think that when it is applied more broadly to writing and readership this connection can be a reductive generalisation, and that we can talk about Wallace and misogyny in ways that are more productive. This has also got me thinking about how I, as a male Wallace scholar, can help to enable the broadest and most diverse conversation about the work from many different voices.

The problem with the aforementioned approach, for me at least, lies in the collapsing of author and readership into a single entity. This leads to a process whereby Wallace’s writing about misogyny, the biographical revelation of unsavoury details about Wallace’s own relationships and the repugnant behaviour of certain men who have read Wallace coalesce into a collectively received idea, one that spawns an increasingly pejorative shorthand between Wallace and misogyny. This, to me, does a fundamental disservice to the kind of urgent questions Wallace asks in his work about communication, empathy and power.

I believe that when there is misogyny in Wallace’s work it is overwhelmingly dramatized, rather than an inherent value of the writing. To give the most obvious example, the eponymous dialogues in the collection Brief Interviews with Hideous Men illustrate the narcissistic, self-serving games that certain men play when addressing women. The interviewer’s voice is pointedly represented by the letter ‘Q’, literalising the lack of the interviewee’s interest in any kind of dialogue. These interviews, to me, embody the richness of Wallace’s work – its focus on the difficulty and importance of communication and empathy, and its illustration of the poisonous things that happen when dialogue breaks down. When misogyny is present here, it is to illustrate its toxicity – the ability of one person to turn the other into an object, rather than a dialogic partner.

Can Wallace’s work be troublesome in relation to gender? At times, absolutely. Avril Incandenza, the manipulative and sexually dysfunctional mother in Infinite Jest (who is at one point actually seen wearing a witch’s hat) has given this reader pause on more than one occasion. However, these moments exist alongside some extraordinarily empathetic character work. Wallace based his first novel, The Broom of the System, around several female generations of the same family, with the protagonist, Lenore Beadsman, transcending a succession of creepy, slow-witted and sexually inadequate male acquaintances. Joelle Van Dyne in Infinite Jest is regularly objectified, described in recourse to her physical beauty and known to men by the soubriquet PGOAT (Prettiest Girl Of All Time), but her history of abuse and substance addiction is laid bare to the reader in a series of devastating, lengthy interior monologues.

What I mean to illustrate by these examples is not that Wallace was some shining, gender-conscious saint – he wasn’t – but that when we talk about misogyny in relation to his writing we might be attuned to the fact that he was committed to addressing it as a major problem of contemporary culture. Does he always succeed? No. Should we talk about the problems inherent in Wallace’s portrayals of gender? Of course. It’s fundamental to a reading and understanding of the work. But this shouldn’t preclude a discussion that moves beyond an elision of Wallace’s work with the more unsavoury elements of his readership.

So how can scholars enable a more diverse conversation on Wallace? Well, the recently launched David Foster Wallace Society (where I’m associate editor at the journal) has a newly established Diversity Committee that is accepting posts about Wallace and diversity at the Society website. The most recent Wallace conference, in Melbourne in September 2017, featured a roughly 50-50 mix of male and female scholars, which is a substantial step-up from representation at previous events. As a scholar I believe that it is part of my responsibility to encourage the broadest and most inclusive conversation in the field – this is, after all, how scholarship lives and thrives.

I don’t intend this piece to be a ‘statement’ on Wallace’s work, but part of an ongoing conversation. With that, I want to finish by recommending Clare Hayes-Brady’s wonderful book The Unspeakable Failures of David Foster Wallace, which contains a fantastic, rigorous discussion of Wallace, gender, difference and the body. And by promising that I’ll forego the man-bun. 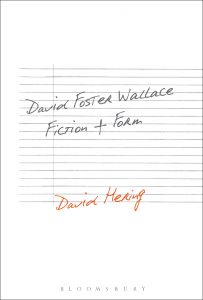 David Hering is Lecturer in English at the University of Liverpool, UK and author of David Foster Wallace: Fiction and Form.