David Foster Wallace was born on February 21, 1962. To honor the 56th anniversary of Wallace’s birth and to celebrate the incredible contributions he made to contemporary literature, Marshall Boswell shares the inspirations behind his book The Wallace Effect, forthcoming from the series David Foster Wallace Studies in February 2019.

The first seeds of my forthcoming book from Bloomsbury, The Wallace Effect: David Foster Wallace and the Contemporary Literary Imagination, were planted while reading Jeffrey Eugenides’ charming 2011 novel, The Marriage Plot.

The novel dramatizes a love triangle between three 1980s college students bewitched by both literary theory and one another.  The novel’s romantic lead is a brilliant, mercurial depressive named Leonard Bankhead, who dips Skoal tobacco and wears a bandana.  As a longtime David Foster Wallace watcher and, more recently, Wallace scholar, I couldn’t help but catch the clear DFW markers.  Wallace famously wore a bandana.  Wallace dipped Skoal.  At one point, the novel’s other male lead, Mitchell Grammaticus, grimly recalls Bankhead’s freshman-year directory photo, which captured the attention of the campus’s female population: “Bankhead had submitted a curious photo of himself standing in a snowy field, wearing a comically tall stocking cap” (The Marriage Plot 92). 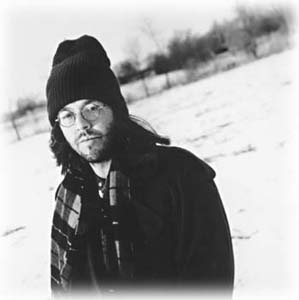 Here is the photo Wallace submitted for the hardcover edition of his first essay collection, A Supposedly Fun Thing I’ll Never Do Again.

Although Eugenides kept telling interviewers that Leonard Bankhead had nothing to do with David Foster Wallace, I knew that photo said otherwise.  Eugenides had some business to transact with the DFW, and I was determined to find out what that business was.

The result was “The Rival Lover: David Foster Wallace and the Anxiety of Influence in Jeffrey Eugenides’ The Marriage Plot” (Modern Fiction Studies 62:3, Fall 2016: 499-518).  In that essay, which I include in the book, I argue that Eugenides fashions his love triangle as an allegory for his own literary rivalry with Wallace. Grecian Grammaticus invokes Eugenides, while the bandana-bedecked Bankhead represents Wallace.  Both young men compete for the affection of the novel’s plucky heroine, the helplessly romantic Madeleine Hanna, a devoted English major and the novel’s emblem for the ideal reader.

What fascinated me most about Eugenides’ playful strategy was the resourceful way it drew upon, and even parodied, Wallace’s various fictional confrontations with his literary rivals, namely John Barth, Thomas Pynchon, and Don DeLillo.

To cite one example, Wallace partially set his 1989 novella, “Westward the Course of Empire Takes Its Way,” in a writing workshop commandeered by a one Dr. Ambrose, author of the famous metafictional short story, “Lost in the Funhouse,” a story actually written by John Barth and starring a protagonist named Ambrose Mensch.  Wallace’s hero is an aspiring writer named Mark Necktr, whom the narrator describes as “a boy hotly cocky enough to think he might someday inherit Ambrose’s bald crown and ballpoint scepter, to wish to try and sing to the next generation of the very same said kids” (Wallace, Girl with Curious Hair 348).  Clearly, Eugenides wasn’t just paying homage to his famous rival; he was joining Wallace at his own game, while also clearing space for himself, just as Wallace did with Barth.

But Eugenides is not alone in playing this game.  Jonathan Franzen’s Freedom also focuses on a love triangle, one of whose participants is a brilliant, mercurial depressive rock star named Richard Katz, who dips Skoal and seduces women.

All of these works engage with Wallace in a spirited game of literary rivalry, one-upmanship, and affectionate homage.

But my book also looks back to the work of John Barth and one of Wallace’s most celebrated contemporaries, Richard Powers. In these early chapters, I trace out the numerous ways these authors introduced many of the innovations on postmodern metafiction that Wallace later claimed as his own.

Taken altogether, the six chapters trace what I call “The Wallace Effect,” a term designed to capture the curious mixture of envy, hagiography and resentment that has come to mark Wallace’s presence in the contemporary literary imagination.  As a writer who viewed literary production as a contact sport, Wallace often defined himself against his rivals, and that aura of literary competition continues after his death.

One thought on “The Wallace Effect”