Willard Bohn answered a few questions for us about Reading Apollinaire’s Calligrammes.

This book reviews all of the previous scholarship for nineteen poems in Calligrammes, provides a detailed analysis, and, in many cases, proposes a new interpretation.

What drew you to writing about this subject?

I am an Apollinaire specialist and have been studying his poetry for a great many years. Commonly considered to be the father of modern French poetry, Apollinaire is one of the greatest poets in any language.

In a sense, I have been researching the book for as long as I have been studying Apollinaire. Approximately ten years ago, following the completion of a book on Alcools (his first major collection of poetry). I decided to focus my attention on Calligrammes, which has not received as much critical attention.

Since Alcools has received the bulk of Apollinaire criticism over the years, I set out to investigate his second major collection of poetry and to show that it is just as important. Despite certain obvious similarities, the two books are actually quite different. Whereas the first illustrates Apollinaire’s debt to the Symbolist movement and his dedication to the modernist project, the second is devoted to his experimental poetry and to his war poetry . Each volume is a brilliant tour de force in its own right.

I have always had a powerful attraction to literature, especially to poetry, because of the remarkable manner in which it expresses and describes human experience. Although French is my primary area of study, I am interested in modern literature in general and regularly work in half a dozen different languages.

My principal experience with Bloomsbury books has been with Surrealist Poetry: An Anthology, which I wrote and published in 2017. The fact that it includes poetry written in three different languages–French, Spanish, and Catalan—makes it unusually wide-ranging and provides the reader with a unique experience that is available nowhere else. 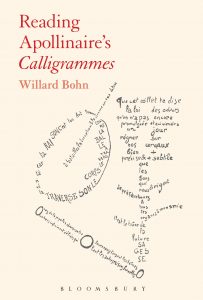