Madelon Sprengnether answered a few questions for us about her new book Mourning Freud, the first volume in the new series Psychoanalytic Horizons.

1) How would you describe your book in one sentence?

The title reads two ways: Mourning Freud analyses Freud’s experiences and theories of mourning as a basis for exploring the preoedipal turn in psychoanalytic theory over the course of the 20th century–and as a means of mourning Freud himself.

In The Spectral Mother: Freud, Feminism and Psychoanalysis, I wrote about Freud’s phobic responses to the figure of the mother. My research for this book caused me to dig deeper into Freud’s biography, which I found at odds with his formulation of the Oedipus complex.

3) Why be concerned that Freud’s life is not consistent with his theory?

Freud used his own experience as the basis for theory. Although he began his career as a medical doctor specializing in neurology, he abandoned this approach for one that was more subjective and literary: the examination of his own inner life, initially his dreams. In this sense Freud helped to inaugurate the memoir genre that is so popular today. I see this as a major achievement but one that opens his interpretations to alternative meanings.

4) How does Freud’s life diverge from his major theoretical formulations?

The Oedipus complex obscures the dynamics of a deeper drama: the traumatic losses Freud suffered as a child, including the death of his younger brother Julius, the loss of his first Nanny, who was dismissed on the charge of stealing, and the relocation of his family from Freiberg to Vienna as a result of his father’s business failure. These losses occurred at an age when Freud could neither assimilate, nor mourn them—setting the stage for his defenses against the losses of his later life.

5)  Few people can remember anything before the age of four. Are you criticizing Freud for that?

No. What I am saying is that because he could not acknowledge his early losses, he could not theorize them. Despite his famous pronouncements on mourning in his essay “Mourning and Melancholia,” he missed the mark when it comes to questions of maternal loss, which in turn obscured his thinking about the “preoedipal period,” which he named but was unable to conceptualize.

6) Why is this important?

Because Freud could not theorize the preoedipal period he not only did not understand maternal (and female) subjectivity but also opened this field of investigation to his successors. Virtually all post-Freudian theories ground themselves in the preoedipal period, e.g. object relations, self-psychology, attachment theory, Kleinian, countertransference, inter-subjective, Lacanian, Bionian, and trauma theory.

I am neither a Freud basher nor a Freud idealizer. Freud changed the way that most of us think about ourselves—not simply in rational terms but also in terms of the parts of ourselves that we do not know, which Freud described as the “unconscious.” We can call it by other names, but most of us recognize what he meant. We do and say things that we had not consciously wished or desired and act in ways that baffle us. We suffer not only from external forces such as Hamlet’s “slings and arrows of outrageous fortune” but also from ourselves.

Freud was not able to mourn the early losses of his life and hence unable to create a complex theory of mourning. Post-Freudian theories, in their focus on the preoedipal period of development, emphasize the primary significance of mourning. It is our task in the 21st century to mourn the founder of psychoanalysis himself. In the words of Hans Loewald, we must learn how to regard Freud not as a “ghost” but as an “ancestor.” 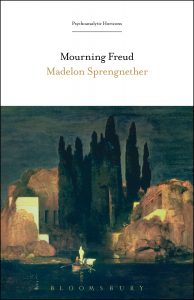 Madelon Sprengnether is a poet, memoirist, and literary critic, and Regents Professor Emerita of English at the University of Minnesota, USA. She has published numerous books in the field of feminist, psychoanalytic criticism and theory, including The (M)other Tongue: Essays in Feminist Psychoanalytic Interpretation (1985), the pathbreaking The Spectral Mother: Freud, Feminism and Psychoanalysis (1990) and Mourning Freud, now available from Bloomsbury. In addition to her academic publishing, she is the author of several books of poetry and memoir, the latest of which, titled Great River Road (2015), views the process of memoir writing through the lens of contemporary neuroscience. She also blogs for Psychology Today.