We’re excited to share the news that two of our recent publications have been honored by the Modern Language Association. Serenella Iovino has been awarded the ninth Aldo and Jeanne Scaglione Prize for Italian Studies for her book Ecocriticism and Italy: Ecology, Resistance, and Liberation, and Alexandra Berlina has been awarded the twelfth Aldo and Jeanne Scaglione Prize for a Translation of a Scholarly Study of Literature for the anthology Viktor Shklovsky: A Reader.

A groundbreaking book, Serenella Iovino’s Ecocriticism and Italy: Ecology, Resistance, and Liberation will help shape Italian studies over the coming decades. Firmly rooted in a philosophical perspective, the work articulates questions of ethics, place, and ecology in the Italian context and makes a convincing case for ecocriticism and environmental humanities. Iovino displays clarity of purpose and a superior ability to bring focus to a discipline that points the way to the future, while arguing for the capacity of literature to make sense of what we are experiencing as both personal and community narrative. An extremely engaging read, this book will find an audience well beyond Italian studies.

The committee’s citation for Berlina reads: 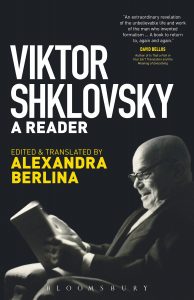 Victor Shklovsky: A Reader provides a brilliant and ambitious portrait of one of the most important literary and cultural theorists of the twentieth century. Covering a period that begins before the October Revolution and extends into the 1980s, the volume presents Shklovsky in his many guises: as a pathbreaking figure in Russian formalism, as a mentor to writers and artists in the years of socialist realism, as a wry chronicler of everyday life in the early Soviet Union, and as an innovative theorist of cinema. Alexandra Berlina’s translations are energetic, fluid, and fully alert to the intricacies of Shklovsky’s unique writing style. Her illuminating introduction and supplemental notes are themselves major scholarly contributions.

Congratulations to Serenella and Alexandra! Join us in celebrating their impressive works at the MLA Convention in New York City this January. Bloomsbury will be hosting a wine reception in the exhibit hall on Friday, January 5th at 3:00 PM. We hope to see you there!