This month my third book about airports will be published. It’s called Airportness: The Nature of Flight.

When I tell my friends and colleagues about this book, they often say something like, “Another book about airports?” A more generous way to look at it is that it is a trilogy which is now complete. And really, these three books are very different from one another—each one has approached the topic in a unique way. 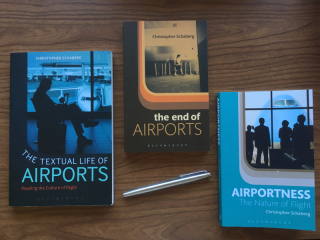 I’ve been reflecting on these books, and I think I can summarize their different approaches like this:

The Textual Life of Airports is about how airports appear: how they appear in literary texts, visual art, and contemporary culture at large—and what these appearances say about how modern humans travel by air.

The End of Airports is about how airports work: how they operate, how they function on the tarmac and in terminals, and what they make passengers and workers do.

Airportness is about how airports feel: how we experience them as travelers and as a species, and how they insinuate themselves into everyday life on this planet, especially at this particular moment.

Airportness follows a single day of flight, from the early morning ride from hotel to the airport, all the way back home at the end of a multi-leg journey. This book really challenged me to think carefully about narrative, form, and emplotment. Writing Airportness pushed me in new ways, which was a good feeling. Sometimes we get into ruts with our writing—writing for the same basic audiences, article after article, essay after essay, book after book. Since I began working on the Object Lessons series, I’ve thought a lot about ways of writing for crossover audiences—ranging from general readers to students to colleagues to academics in other disciplines—and I incorporated a lot of this thinking into Airportness as I revised and organized it. (At one point, shortly after the 2016 U.S. presidential election, I nearly re-conceptualized the book drastically—but fortunately my calm, measured editor Haaris Naqvi talked me back from the ledge, and the final book is so much better because of his keen advice. Take note: thank your editor today!)

But so with Airportness I was trying to gear my airport studies to a broader audience—while still drawing on various critical traditions and concepts throughout the book. I was also trying to push the envelope in terms of what nature writing can be. I’ve written about the weird ecosystems of air travel before, but in this book I attempted to keep these considerations in the foreground, wondering about human flight as something counter-intuitively natural for our species. Love it or hate it—or just tolerate it—air travel is something our species has evolved to do. What would it mean to inhabit these spaces and times—airports, airliners, the durations of flight—with this in mind?

With all the harrowing headlines and stories in the news—skirmishes between passengers, airline agent aggression, the iron fist airport security, travel bans, shrinking seats, laptop bans, and so on—the topic of flight is in the air, more than ever. I hope Airportness can help put some perspective on this fraught form of mobility.

Am I done with airports, now? My friends and colleagues want to know. When I delivered this manuscript I really thought yes, I am done. BUT. I keep writing. And things keep happening at airports and in planes, things that are clearly (and sometimes not so clearly) related to this tense moment. There’s much more to explore around this topic, for better or worse. So, I’m working on something entirely new. Stay tuned.

In the meantime, I hope readers will enjoy Airportness: The Nature of Flight. You can take it with you on your next flight! It’s conference season, after all—a time when so many academics fly around, lose bags, make connections, and share their ideas. This book brings together my latest theories and questions concerning the nature of flight.

Christopher Schaberg is Associate Professor of English at Loyola University New Orleans, USA. He is the author of The Textual Life of Airports: Reading the Culture of Flight (2013), The End of Airports (2015) and Airportness: The Nature of Flight (2017), and co-editor of Deconstructing Brad Pitt (2014). He is series co-editor (with Ian Bogost) of Bloomsbury's Object Lessons.