Now more than ever, we need smart writing for broad audiences.

Since we launched Object Lessons in 2013, we’ve been delighted by the overwhelming interest in our books and essays. This “crossover” approach to smart writing for a general audience has proved to be an appealing alternative for a range of authors, and the final products have likewise found an eager readership.

Demand for the kind of writing Object Lessons offers is enormous. We receive dozens of pitches every week for books and essays. One of the difficult parts of the series is turning down the countless proposals for promising projects that aren’t quite right, yet, or aren’t right for us.

To further the aims of this sort of writing—whether with Object Lessons via Bloomsbury and The Atlantic or in other venues—we were recently funded by the National Endowment for the Humanities to run a series of workshops on public writing for academics, especially on technology. The NEH calls these programs “Institutes.”

Our institute will take place over the next academic year, sited in proximity to four conferences throughout the fall and spring:

More information and instructions to apply can be found on the Object Lessons website.

We welcome applications from potential participants who wish to write for general audiences—or indeed from scholars and writers who are already working on projects that fit this bill.

Each workshop will include about ten participants, and will feature discussions with guest authors, editors, and publishers. The goal of the workshops is for each participant to leave with a distinctive project ready to pitch, propose, or otherwise shop around, having made useful contacts in editing and publishing—areas of the profession that all too often remain mysterious and esoteric to scholars and writers. 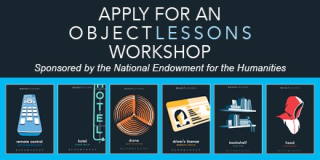