An excerpt from the Object Lessons book Silence by John Biguenet

In our first visit to Florence, while still students, my wife and I found a little restaurant near our bat-infested pensione as sunset turned the Arno bronze. Having been raised by her grandmother from Viareggio, the nearby beach resort, Marsha ordered our meal in an Italian our old waiter would have recognized as native to Tuscany. He, however, refused to write anything on his pad until impatiently interrupting her with a stern “Signorina!” he turned to me inquisitively. Only after I nodded did he scribble down our order.

Later, trying to master the craft of teaching, I read an article about the tendency of both male and female teachers to interrupt female—but not male—students when answering questions. Of course, I thought myself exempt from such sexism until I began to make an effort to restrain myself from interrupting students. It quickly became obvious to me that I had to remind myself to allow the student to complete an answer when that student was a woman but I had few occasions to practice such restraint when a man was speaking in the class. I found myself rarely on the verge of interruption if the student was male.

There was little comfort to be drawn from the research that indicated I would have been just as likely to interrupt a female student if I had been female myself. I found even more troubling than this revelation about my teaching the recognition that my female students had endured an education their whole lives in which instructors cut short their insights while their male classmates were accorded full attention. It’s impossible to believe that such behavior by teachers and other respected authority figures would not have lifelong consequences for those silenced through interruptions as well as through less obvious pressures to defer to the judgments of male counterparts.

We live in a world where women are often silenced, sometimes violently. But the daily indignity of being casually silenced is so much a part of a woman’s experience that such less dramatic instances of the imposition of silence on another human being, as a waiter’s or a teacher’s curt interruption, may actually illuminate more fully than draconian examples the role of silence in maintaining existing distributions of power in society. Silenced myself by the limitations a small book imposes upon its author, I offer only a single example, though volumes remain to be written about the silencing not only of women but of all those marginalized by the speech of the powerful.

Bessie Dendrinos and Emilia Ribeiro Pedro demonstrate how much is to be gleaned from analysis of an easily overlooked silencing of women in daily life: the giving of street directions.1 In their review of the literature about silence and gender, the researchers reference an earlier study whose author “presents data which show how men exercised power in their daily communicative encounters with their female partners by being silent. The relatively silent behavior of husbands tended to silence their wives, who thus worked harder to maintain the interaction but whose efforts were confounded by their partners’ frequent ‘no-response’ turn-taking violations.” Dendrinos and Pedro note both that “Power is routinely exercised through speech” and that “Power . . . may also be exercised through silence.”

At the highest levels of authority, the latter may be preferred. In Le Fil de l’épée, his 1932 meditation on leadership, Charles de Gaulle writes, “Rien ne rehausse l’autorité mieux que le silence, splendeur des forts et refuge des faibles.” His perhaps surprising insight loses little in translation: “Nothing enhances authority better than silence, splendor of the strong and refuge of the weak.”2 But de Gaulle goes further: “Silence is the ultimate weapon of power.”3 Part of his meaning surely lies in George Bernard Shaw’s line in Back to Methuselah (1921) that “Silence is the most perfect expression of scorn.”4 But more than that, the questions of the powerless, the demands of the dispossessed, can be ignored by the powerful with impunity. Leonardo da Vinci agrees: “Nothing strengthens authority so much as silence.”5 (Of course, one could read that to mean that the silence of the ruled strengthens the ruler. On the other hand, da Vinci, always at the mercy of powerful patrons, was well acquainted with agonizingly long waits for a ruler to break his silence and authorize a new commission.)

In giving street directions, though, he who speaks seems to assert authority. The researchers based their conclusions on thirty-four random instances of a female asking for directions from various groups in cities and smaller towns in Portugal and Greece; they found no significant differences in the responses elicited in the two countries.

Some interesting gender-specific details emerged. When women couldn’t provide directions, they apologized; men didn’t. Women used “will” in giving directions; men used “must.” Men also tended to use repetition. But the role of silence in giving directions was the element most clearly gender specific.

For example, in the few instances in which a pair of women were asked for directions, “the role of informant seemed to be negotiated” by eye contact. Groups of men, on the other hand, spoke over one another until one emerged to give directions. But in nearly all mixed-sex groups, “it was the males that ultimately assumed the role of informant.” The women present were either silent throughout or silenced. When women began to provide directions, they eventually “gave up their role as informants. In only one encounter, when the man had completed his turn, the woman confirmed what her companion had said, and repeated his last utterance verbatim.” In other encounters, females who could have corrected the inaccurate directions provided by a male either remained silent or, rather than directly correcting him, asked a question that would make him rethink the directions.

A particularly interesting exchange occurred when directions were asked of a small group of thirty- to forty- year-old men:

One of the men responded immediately and proceeded, without any interruption from the others, to give long and complicated directions. A woman in her twenties, coming out of a nearby bakery, heard the confusing explanation and intervened to help clarify the man’s account. But as soon as she began to talk, she was interrupted by the same man who had spoken and who now began to repeat what he had said before. The woman intervened again and was allowed to complete her turn of short and precise directions. At that moment, another man who had witnessed the whole incident took the floor and spoke in a loud and authoritative tone, as if to correct the female speaker. However, he simply paraphrased the information which had been provided by the woman.

In the only two instances in the research where women were allowed to provide directions, men still had the last word. The example that brought to mind our dinner in Florence nearly half a century ago involved another young couple. After the woman had offered her two sentences of simple directions, “her male companion looked at us and confirmed: ‘Sosta. That’s right.’”

The old waiter who upbraided Marsha that summer evening long ago would have approved of the young man.

John Biguenet is Robert Hunter Distinguished University Professor at Loyola University, New Orleans, USA. His publications include The Rising Water Trilogy: Plays (2015), Oyster (2002), The Torturer’s Apprentice: Stories (2001), The Craft of Translation (co-editor with Rainer Schulte, 1989), Foreign Fictions (1978), and four other books. His seventh play, Ever After, will be featured at the Orlando Shakespeare Theater’s PlayFest 2016.  He served as the first guest columnist of The New York Times (2005-2006). His latest book, Silence, is part of Bloomsbury's Object Lessons series.

Learn more about Silence and our Object Lessons series at Bloomsbury.com 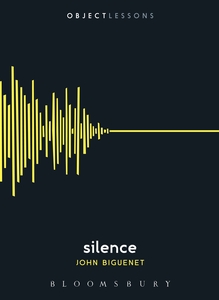 One thought on “Silencing Women”