Earlier this past month when I emailed the Advisory Board of the Object Lessons series to announce the release of our six latest titles (Silence, Phone Booth, Hotel, Waste, Refrigerator, and Glass), I was delighted by one common theme in board members’ responses: several of them planned to teach classes using at least a couple of the Object Lessons books.

I had been thinking about the possibility Object Lessons books assigned in college courses since we launched the series, but I never quite knew how it would play out. One early idea I had was that Object Lessons books could be adopted for “common reading” curricula, especially for First-Year Experience type programs. (Driver’s License, anyone?) It was gratifying when one of our first books, Remote Control, was picked up for an introductory media studies course—that made complete sense. 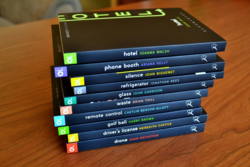 More recently, during a Reddit AMA that my co-editor Ian Bogost and I did with the current six Object Lessons authors, we got a question about teaching Object Lessons—and I began to realize the scalability and groupings of the topics within the series. For instance, Waste, Dust, Silence, and Golf Ball could be used as the basis of an environmental humanities reading group. Remote Control, Phone Booth, Refrigerator, and Glass could form the backbone of a technology studies seminar. Hood, Driver’s License, and Cigarette Lighter could provide the foundation for an American Studies course focused on everyday objects. The combinations are myriad—and we’re only talking about fifteen books so far (including the five titles forthcoming in January).

I designed one my own courses this semester around the Object Lessons series, taking a quite pragmatic approach. In my class we started with Ian’s book Alien Phenomenology, or What it’s Like to Be a Thing, and Jane Bennett’s book Vibrant Matter: A Political Ecology of Things. I used these two books to provide students with a sense of the intellectual background that (in part) inspired the series. I also brought in several excerpts from literary texts, examples that evince the rich lives of ordinary things in fiction and poetry. These showed us how often writers use everyday objects even when they are not explicitly trying to be object-oriented ontologists.

Then we moved into the actual series. I shared our original series proposal with my students, and we talked about what it means to edit a series of books. We and read and discussed the first four titles, and then considered Russell Jacoby’s blistering critique of the series in the Chronicle Review last April—we talked about it not only in terms of Jacoby’s theoretical positions and arguments, but also to see how we might use his more concrete feedback to refine the series moving forward. The new six titles then offered real case studies to talk about how the series has since developed and widened in scope; and we lingered on Joanna Walsh’s Hotel by way of discussing the creative potential of Object Lessons books, even within our relatively tight constraints (one thing in 25-30k words!).

Currently in my class we’re talking about the practical ends of the series—design, marketing, publicity, and review venues—as we prepare our next five titles (Cigarette Lighter, Hood, Dust, Shipping Container, and Bookshelf) for publication in January 2016. Meanwhile, my excellent and interested students are working on their own projects through which to think about the series: for example, one student is working independently on an Instagram account for the series; another has launched her own small press for poetry chapbooks, and she’s applying lessons learned about the ins and outs of publishing, drawn from our series. Other students are trying their hands at writing object-oriented essays. (Here’s an amazing essay that was written by one of my students the first time I tried this assignment, a couple years ago in a Contemporary Nonfiction course.)

But finally, all these things are not just about Object Lessons: I’m constantly reminding my students that the series is only one teeny tiny part of a vast and dynamically shifting landscape of media and publishing. This is a terrain that is continuous with literary production and consumption—topics more commonly considered the proper domain of English departments. We’re not all that far from the rest of their curriculum; in fact, we’re deep inside it, seeing and shaping how books come to life.

The Object Lessons series has given me a way to invite my students into an active field, one where texts are lively things not only to be read, but to be crafted, worked on, and realized in context. Without being too heavy handed about it, the series has become a place of praxis, where rubbery abstract ideas meet the firm road of the real, and books find their way into the hands of readers. It has also been a surprising confluence of my teaching, my research activities, and my service to the profession. I don’t think it’s a stretch to see this example as transferable: if you are editing a series of books, organizing a conference on your campus, or guest-editing a journal issue—invite your students to get involved! These sorts of collaborative activities not only give students actual skills, but they also help break down the musty and specious divisions between college and the so-called “real world.”

And the series has had a real impact on my writing, too. Reading our terrific manuscripts has reinvigorated my own fervor for inquiry, and as I work on a new book project (a third book about air travel—I know, I know!), I find myself borrowing from the keen energy and stylistic moves of our Object Lessons authors. My next book may not be an Object Lessons book per se, but I hope it will reflect the same spirit of wonder, playfulness, and critical imagination.

Since its inception, Object Lessons has been an exhilarating collaboration between scholars, editors, designers, writers, readers, reviewers, and booksellers. Inviting students into this collaborative sphere has not only been incredibly rewarding; it has also been remarkably easy, perhaps because my students recognize that this is no mere simulation or exercise—it’s something real.

Christopher Schaberg is Associate Professor of English at Loyola University New Orleans, USA. His latest book is The End of Airports, forthcoming from Bloomsbury. He is series co-editor with Ian Bogost of Object Lessons. For more information on the series, visit the Bloomsbury website or www.objectobjectsobjects.com.