John Kasper and Ezra Pound: Saving the Republic publishes this month. The book examines Pound’s correspondence with this militant far-right American activist who first came to prominence with his violent campaigns against desegregation in the Civil Rights era.  We asked author Alec Marsh a few questions about the book and his experiences researching the disturbing new light the book sheds on Pound and his work.

Your new book is about extensive correspondence between Ezra Pound and John Kasper. Ezra Pound is of course familiar as one of the most important literary figures of the 20th century, but Kasper might be a name fewer people are familiar with. Who was he?

Kasper was a Columbia University graduate who first contacted Pound regarding a prospective Ph.D. thesis. On meeting the poet, he became Pound’s most active agent in the world outside St. Elizabeths Hospital where Pound was confined as a political prisoner. As publisher (with David Horton) of the Square $ Press, as proprietor of two bookstores, one in Greenwich Village, NY, and later in Washington D.C. Kasper did his best to keep Pound’s books and the poet’s right-wing politics in front of the public. Kasper was a right-wing activist from a conservative evangelical Christian milieu. Until 1954-5 he might be best characterized as Neo-Nazi; like Pound, he was an avid supporter of Sen. McCarthy. After the BROWN decisions, of 1954, 1955, mandating the racial integration of public schools, Kasper took up the poet’s States’ Rights politics and agitated throughout the South against these federal mandates. Pound, Kasper and virtually all white Southerners were convinced that school integration was a Communist plot that would lead to race-mixing. They realized that these decisions implicitly surrendered the politically powerful myth of white supremacy. For Kasper and Pound the Communist conspiracy was simply the contemporary manifestation of the on-going Jewish conspiracy, a plot to degrade all races except their own “chosen” people.

In many ways this book is a political biography of Kasper. We see him evolve from an intellectual neo-Nazi to KKK style terrorist. He was responsible for fomenting riots in Clinton and Nashville, Tennessee. He was closely associated with dynamiters of schools and synagogues, although never charged.  Nonetheless, he served time in Federal prison, county and local jails for his activities.

When Pound was released in 1958 Kasper was in Federal Prison. He travelled to Italy to see Pound in 1962, but the poet would not meet with him. He was the candidate of the National States’ Rights Party for President of the US in 1964. He gave up political activism after that.  He died in 1998.

What does the relationship between Pound and Kasper tell us about Pound’s controversial political views in his later life?

An admirer of Thomas Jefferson from early on, it was natural for Pound to take a “southern;” point of view when it came to domestic American politics. That is, he believed in the rights of the states to resist unwelcome Federal mandates.  For personal reasons, given the indictment for treason hanging over his head, Pound needed to be a “strict constructionist” regarding the US Constitution, so like virtually all American conservatives Pound was bound to side with the South when the Brown decisions of 1954 (concerning principles) and 1955 (concerning implementation) came down.

Pound’s “States’ Rights” position is perfectly consistent with his outlook all along.  So too is the radical approach Pound endorsed when he collaborated with Kasper and others to write “Virginians On Guard!~ –an attempt to influence the Constitutional Convention called in Virginia in an attempt to resist the Federal decision mandating  the integration of schools. The unhappy result is a vicious pamphlet joining some of Pound’s pet ideas with scurrilous KKK-style propaganda.

Do you think knowing more about his far right sympathies affects the way we approach Pound’s poetry? Can we enjoy his writings despite these sympathies?

This is difficult, because Pound’s later cantos by his own account were conceived as a “political weapon.” But that is not all they are, my book follows Pound’s earthly politics, but there is a cosmic agenda to Pound’s Cantos that is alive and vital. Most of all, Pound’s way of making poetry, his music, his ability to sense and assimilate the hints and glimpses he found in the ‘green world’ of Nature as well as in esoteric books, continues as a beacon light to those who wish to experience, understand, and above all, to write poetry that matters.

What first inspired you to start looking into the relationship between Pound and Kasper?

The vast amount of correspondence at the Beinecke Library (Yale) intrigued me, although almost all of Pound’s side of it is missing. If Kasper was the fringy crank and loser most biographies portray him to be, how is it that he and the great poet exchanged hundreds and hundreds of letters—to say nothing of their close personal contact in the 1950s. It became clear that Kasper was no more a nut-case than Pound himself and that he had many good points. On the other hand, I did not guess the extent of Kasper’s involvement with right-wing segregationist violence when I started. I would have much preferred things to be otherwise.

Is there anything that particularly surprised or shocked you when you were doing the research for this book?

Pound was quite aware of Kasper’s activities and supported them—that surprised me. Scholarship has painted Kasper as a marginal character, a lunatic groupie; in fact he was Pound’s best reader in the 1950s, someone he trusted to be his agent to the outside world.  I was surprised and dismayed that Pound had edited and vetted “Virginians On Guard!, the blue-print for a new, rigorously racially segregated Virginia that Kasper took south with him in 1956.  Finally, aside from Kasper, who represents the American racist right, two others in Pound’s circle had far-reaching influence on the American Right as it is constituted today. Although I can only touch on this in the current book, Dave Horton is an important ideologue behind the dispute over Federal Lands in the US Southwest today that led to the  “Sagebrush Wars” of the 1980s and more recently the Bundy Ranch incident—an event that brought 3000 armed militia to the Bundy Ranch in Nevada to oppose Federal forces just last year. And then there is Eustace Mullins, a fluent, pathological anti-Semite whose was Pound’s first biographer. His death in 2010 was widely mourned by people associated with the Tea Party Movement here in the US.  Thus, St. Elizabeths can be seen as a vortex of various rightist tendencies, all drawn to the charisma of Ezra Pound.

I should add that I do not regard John Kasper & Ezra Pound as an attack on the poet.  It was certainly not conceived in that spirit. Rather, it is an attempt to understand the man and to elucidate as faithfully as I can, Pound’s ideas regarding American racial politics in the 1950s, our “Civil Rights Era.”  As Pound scholars our job is not to wish away ideas we find unpleasant and wrong—we are not fans after all –but to understand those ideas and to put them in context. This is what I try to do here. 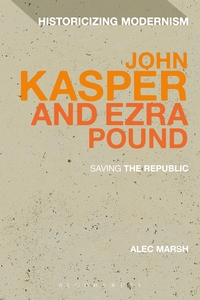