What the Dickens shall we do about Chaucer?

Ever wondered why no one in the UK seems to read Chaucer anymore? Why Gail Ashton sees a ‘residual affection for Chaucer’ compromised at every turn? Read on…

It is the tap end of one of the hardest winters for decades.  I am sitting in a steamy café talking to a former senior examiner about Chaucer’s shrinking presence in a UK school system.  I recognised him from the scarf he said he’d be wearing; his bobble hat threw me for a while, but we joke about blind dates and strangers on a train and I forget for a moment why we’re meeting in this way. It’s all rather reminiscent of a spy movie and this makes me laugh as much as it concerns me.

My ‘date’ – let’s call him Geoffrey, Mr G for the craic -  tells me how he’s taught Chaucer extensively, all the usual ‘culprits’: the Miller’s, Wife’s, Pardoner’s, Knight’s, Nun’s Priest’s tales—, his interest in Chaucer’s narrative and story-making matching my own.  His eyes light as he recalls reading the ‘Nun’s Priest’s Tale’ aloud to kids, their delight in the humour of it.  He likes the ‘Merchant’s Tale’ too its ‘cynicism’ which can ‘make it modern,’ fresh.

Later he will say ‘as you shut the door on Chaucer it very quickly stays shut.’ And I will walk back along the road against the fading light and press of commuters hurrying home, just as earlier I wandered around the museum, and took tea with a professor I taught with, in a former life. It seems apt.

Driving in, I was tuned to Jeremy Vine’s BBC Radio 2 lunchtime show which was debating a recent parliamentary call to ensure all school children will have read Dickens by the time they are ten. The phone-in celebrates National Dickens Day (2012), each caller someone of a certain age extolling Dickens’ humanistic impulses, universal values, a mordant social commentary made to speak for our economically depressed contemporary times. On this day Dickens is both fully alive (in films, TV series) and long-gone, a ‘classic’ author whom nostalgic readers quote at length. Claire Tomalin’s recent Charles Dickens: A Life (2011) shares air space with Prince Charles’ rally to get children reading again. I am already depressed.

I share with Mr G my concerns about children being force fed a diet of classics, recount how I’ve just heard an academic warn against reading Dickens too early on the grounds he’s a ‘mature read’. Mr G responds with an anecdote about how at one presentation he gave in Newcastle, someone demanded to know ‘why are you not teaching my child Dryden?’  Education in the UK has, Mr G says, an ultra-conservative agenda that ‘cuts across all parties’ and where English usually takes the brunt of reform—as in 2000, under Labour, when ‘a wholesale root and branch renewal gave us more of the same.’ The watchword, he believes, is always ‘rigour,’ something seemingly achieved only by teaching and examining canonical, pre-20th Century authors, often, specifically, those our political leaders studied at school and university.

At the same time, it seems, no-one wants to invest in Geoffrey Chaucer. Mr G speaks of a ‘residual affection for Chaucer’ yet I hear it compromised at every turn.  He invites me to contemplate my suspicions about educational idealogy in the UK, and then triple the worst of them. Dominated by inspections, assessment and examination league tables—which are, he suggests, ‘more pernicious than I’ll ever know’ — teachers are ‘scared witless.’ No teacher, he says, is going to take a risk with Chaucer who is perceived as less accessible to today’s students with his ‘weird language’ and as one of those authors available ‘only for the best. I wonder if this is why those schools already at the top of the table (grammar or independent schools) will teach Chaucer when, Mr G tells me, ‘few comprehensive schools dare risk it.’ And just to compound the inequity, most teachers ‘go to default,’ teaching only the texts and authors they were taught at A level.

Mr G insists that, contrary to popular belief, kids today do read, are, in fact, highly text-literate; the problem comes from the gulf between what and how they read, and what the UK examination system assesses. We are, he says, asking technical questions about how Chaucer constructs his narratives for instance, even as no-one is teaching the ‘nuts and bolts’ of how he does it; ‘the technical repertoire isn’t there.’ Here, of course, we too fall into the honey-trap of nostalgia, reminiscing about how we read aloud in our old-school classrooms, something no-one does anymore, so that ‘the sound’s gone.’  Instead Chaucer’s work becomes ‘a story you had to decode’ he’s ‘written about as though he’s a novelist.’  So, all sense of Chaucer as a poet seems to have gone.

If we no longer recognise Chaucer as a poet, in what sense do we read him, then, if at all? Oddly enough in the recent past, Chaucer has appeared on examination syllabi in sections on Poetry.  Surely this was good?  Mr G thinks not, telling me that the pressure to impose on English Literature a grid of tick box, quantitative criteria—‘the right buttons’ —leads to many compromises and ‘mile-off thinking.’  The result: a relatively random choice of texts which, inadvertently, ‘gave Chaucer more chance.’ Michael Gove’s (former Education Minister) more recent ruthless so-called radicalisation of UK curricula – more of the same – means ‘now Chaucer fits less easily into the new comparative model.’ And where once Chaucer might have been an option for coursework, government reforms have ensured that final end of course examination is currently the only acceptable mode of assessment.

Or is it? Chaucer’s face, it seems, simply doesn’t fit.

As ever, nothing is quite as it appears.  Even if Chaucer was formerly available for coursework, in Mr G’s long experience as an examiner not a single school ever took this up, which raises further questions: about accessibility (again) , innovation, ways of teaching.  So, too, despite Mr G’s earlier comments about a lack of technical vocabulary with which to discuss Chaucer’s text, he feels ‘and anyway that’s not crucial.’ What about, he asks, exploring Chaucer’s work through issues, contexts and ideologies, thinking about, say sex and sexuality? ‘The moral pornography of, say, the ‘Merchant’s Tale’… that’s glossed over…that’s got lost in the way we ask the questions.’

In Mr G’s view, ‘The really interesting questions are not the ones being asked,’ of any writers. The best thing on one of the new A level papers (2014), he says, is the section on narrative ‘which is where Chaucer should be and isn’t … Chaucer could  be there and be really fascinating’—if only we were free to ask ‘what interesting narratives can we do’ rather than ‘how does the question correlate to the assessment criteria we’re given.’

Yet even if ‘how sad (it is) that he doesn’t fit,’ —and we do—I am forced to concede that perhaps I am barking up the wrong tree.  I’ve already been told that it’s the specifics that matter—which is why the exam questions hardly change—and not the broader issues, or the place of narrative, or genre in our culture. I persist: should we teach a ‘modernised’ Chaucer? Incorporate his afterlives, the web, TV adaptations? Hit those text-literate, media savvy kids right where they most hurt?

The town clock strikes.
Day draws to a close. Mr G demands, ‘who’s to say who we should read?’ I agree. Then, ‘what’s the point of every kid reading Chaucer if you stop as soon as you can?’ I admit I don’t read him for pleasure.  We both confess (sheepish? defiant?) we rarely go to the theatre. And I wander home, thinking on Mr G’s quick look, that comment said not at the end, but which may be the final word after all: ‘who says I’d teach him at all?’
Here’s the thing. I still would.

Read more…Gail Ashton in Conversation with Gwyneth Lewis and Patience Agbabi, this website.
Gwyneth Lewis, former Welsh Poet Laureate, says, ‘If you don’t have help to read Chaucer at school, then you’re never going to venture into that world.’ Likewise, we have to show students how to access the Bible, ‘the biggest source for literature until now; ’otherwise we give ‘our children roots into their culture which are more shallow…it’s like being cut off from the water table.’

Patience Agbabi, Telling Tales (2014), is currently working with The Full English to produce a teaching pack on Chaucer for use in UK schools. She says,

There’s a freshness to Chaucer’s language that makes it timeless. That’s what I first fell in love with as an A Level student. I was astonished at how accessible and irreverent he was…

Everyone I’ve met who studied Chaucer at A’ Level loved it yet it has dipped in the popularity stakes. I hope my book, and the proposed Teaching Pack, will in a small way change that trend. The pack will give teachers several pedagogic approaches so they feel more equipped to take Chaucer into the classroom. Clearly a whole generation have missed out on studying Chaucer themselves so it’s especially daunting for them to teach it.

I presentedTelling Tales as a seminar, workshop and keynote performance at the NATE conferences in 2013 and 2014. Everyone agreed that Chaucer should have a higher profile on the National Curriculum. I suspect our results-led society has frightened secondary school teachers into going for the easier options. Yes, the language is challenging but in some ways, easier than Shakespeare’s in-jokes to the groundlings. If A’ level students experienced the electrifying live version of The Reeve’s Tale as I did at Cheltenham Literature Festival, they’d love Chaucer. This was performed by Trevor Eaton ‘The Chaucer Man’. (Actually, there was an A’ Level class in attendance and they did love Chaucer). I perceive there’s also a move away from poetry in general and Chaucer is seen as the most difficult.

Forthcoming this Spring! Recommend Medieval Afterlives in Contemporary Culture to your librarian! 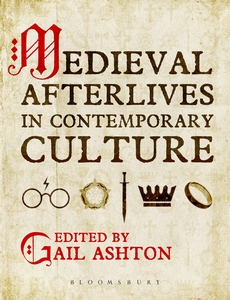