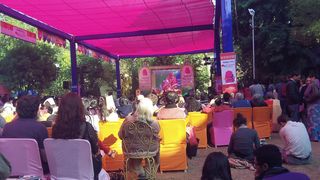 As you enter Diggi Palace, your eyes are awash with pink – pink
banners, pink lanterns and swathes of pink cloth moving haplessly in the
January breeze of the pink city, Jaipur. It’s not only the ‘pinkness’ of the
Jaipur Literature Festival which proves mesmerising, the footfall at the
biggest literature festival in Asia is also captivating, with various tents,
rooms, stalls and bookshops, the Jaipur Literature Festival is certainly
something to experience, especially if it involves your book launch…

Reading New India: Post-Millennial Indian fiction in English was
inaugurated at the literary festival at Diggi Palace to a Saturday afternoon
audience. As a slice of ‘New India’ itself sat under the canopy of the ‘TATA
Steel Front Lawns’, Namita Gokhale co-director of the festival presented a copy
of Reading New India to the
public, underscoring its importance in the contemporary literary scene
of India.

The idea for Reading New India came as I flew out of Mumbai in stormy
monsoon clouds in 2009. I had, once again been hit by the staggering
development and construction each time I left the airport, be that in Mumbai,
Bangalore, Cochin or Delhi. In tandem, the literary production of Indian
fiction in English was equally staggering and I knew then, that this body of
new writing deserved academic attention. Academics from both the UK and India
have echoed this need, Prof Malashri Lal of the University of Delhi endorsing
the publication, saying that: "it’s the first book to focus on fiction at the
millennium, the crossroad for India’s globalization". There has been particular
interest from universities in Hyderabad, Bangalore and from Rajasthan looking
for a text to complement literary courses and postgraduate interests in contemporary
Indian fiction.

"A compelling introduction to the multitude of fresh voices to be found
in the pages of twenty-first century Indian fiction. Putting its main emphasis
on novels published within India itself, many of them unknown outside the
country, it invites its readers to fasten their seatbelts for a journey into a
land of call centres, reality shows, ‘‘Metro Reads’’, MTV and variant sexual
behaviour."

Much of Reading New India is about young and aspirational, urban
India, the narratives explored in the book suggest that postcolonial narratives
belong to an erstwhile India and that post-millennial fiction in English from
India captures and critiques a post-liberalised India of the noughties and
beyond. Chick Lit, new waves of historical fiction, Crick Lit (my term) and the
graphic novel are all manifest of this post-millennial literary feast and as
the publishing scene in India keeps growing, offering affordable paperback
books of these various and engaging narratives of life in 21st
century India, reading and understanding new India becomes ever more necessary.
Indeed, evidence of  ‘new India’ is all
around, malls in the metros push up, flyovers re-sculpt the urban landscape,
cranes hang on the skyline, and as 2013 sees Jaipur’s autorickshaws fitted with
inbuilt satnavs, one thing is for sure – more people will certainly make it to
Diggi Palace in 2014.

E. Dawson
Varughese is an independent scholar in literary and cultural studies. She is an
experienced field researcher of world literature in English and is the author
of Beyond The Postcolonial: World
Englishes Literature (2012). See her work at: www.beyondthepostcolonial.com