Ewan Fernie is the editor of our new
book Redcrosse: Remaking Religious Poetry for Today's World – a new form of liturgy based on Spenser's epic poem The
Faerie Queen. In the following extract from the Introduction to the book, Ewan talks about how powerful The Faerie Queen is today, and how Spenser's early modern story can still speak to us if read with imaginative intensity and engagement.

'Spenser
was born around 1552, his life contemporaneous with what has been called the
Elizabethan settlement. Indeed, he dedicated The
Faerie Queene to Elizabeth: ‘To the most high, mightie
and magnificent empresse renovvmed for pietie, vertve and all gratiovs
government Elizabeth by the grace of God Qveene of England Fravnce and Ireland
and of Virginia, Defendovr of the Faith.’
Et cetra, et cetra: the Queen paid him
a pension, and some centuries later Karl Marx called him her ‘arse-licking poet’.
We might more positively see Spenser as the epic poet of Anglicanism. And if the Church of England is
now all too often associated with fetes, conventional weddings and backward sexual
politics, under Elizabeth the First it was a new church militant, hard-won and
sometimes bloodily maintained. Everything was at stake. Church and state were
united in the supremacy of the monarch. Spenser, for his part, believed that
under Elizabeth a new form of poetry could be attempted which aimed at nothing
less than forging a new mode of human existence. He expressly wrote The Faerie Queene to
fashion a new man.

His
own life was fomented in violence. Its salient and (at least in recent years)
most notorious feature was his involvement in a brutal chapter of English
colonialism. He arrived in Dublin in 1580, in the wake of the suppressed
Desmond rebellion. Ninety per cent of the male inhabitants of Munster had died
and the survivors, Spenser observed, looked like ‘anatomies of death’. And yet, in A View of the Present State of Ireland,
Spenser actually recommended starvation as a way of bringing them to heel more
permanently. Nor is his poetry any refuge from such shocking violence. In 1586,
Spenser acquired the manor of Kilcoman, former seat of the Desmonds. But by 1598
his Irish enemies had burnt him out and, according to Ben Jonson, he lost an
infant son in the blaze. Spenser returned, destitute, to England in 1599. He is buried in Westminster Abbey and
his fellow poets paid tributes at his grave.

But
if death thereby installed Spenser in England’s Parnassus, his star has
somewhat waned in recent years. The Faerie
Queene is typically seen as too big,
incoherent and remote to be read or taught effectively, and Spenser’s
establishment affiliations and Irish record have been major turn-offs. He’s an
epitome of vanishing English literature, of literature which is going from
courses and becoming a more or less exclusively antiquarian interest.

Yes this poem is still so relevant. Spenser
invented his own stanza:
it has nine iambic lines which rhyme ababbcbcc, the first eight being pentameters while the
final, ninth line is a hexameter. It is intricate and capable of elaborate emblematic effects,
which are often
exquisitely beautiful but equally extend to impressively ugly moments. And yet, the Spenserian stanza
also moves with limpid fluency
and authority, partly as it tips from a and b to c and spills into its long last line, which also
marks a break and pause before the next stanza. In other words, Spenser’s stanza fuses lyric intensity with
mesmerising story-telling
momentum. It seems to be discovering its own story as it goes along. For all their seriousness and
ambition, Spenser’s lines
are at the same time poetry disporting in and as itself. And that makes for an exciting indeterminacy.
You’re never really sure what the new life and self Spenser is aiming at is actually going
to be like. The Faerie Queene is a truly and profoundly experimental poem. In the end, it
does seem to reveal some kind of potential for poetry to remake life.

So
this superannuated English poet actually presents the present with a tremendous
and exciting aesthetic, ethical, political and religious challenge. And since
we wanted to create a challenging rather than a conservative and self-securing
liturgy, a questing liturgy,
Spenser was a perfect fit.

Allegory
has been a particular problem for Spenser in the recent, wilderness years,
when, in his own country, his poetry has slipped into all but terminal
obscurity – Salley Vickers and Sarah Apetrei testify in this book as to how
difficult they found it actually to buy a copy of The
Faerie Queene – but even allegory didn’t phase us. We
moderns tend to think ourselves too sophisticated for allegory. It’s at the
same time too fanciful and too earnest and judgmental, too cut and dried. But
Spenser expressly calls his allegory a ‘dark conceit’, a thing shaded in mystery and perhaps irony which
veils as much as it reveals. The modern
British poet Elizabeth Jennings describes the expressive potential of just such
allegorical mysteriousness in ‘The Counterpart’: ‘The intellect no crystal is
but swarming/Darkness on darkness’.10
If a formal image, far from being too
clear and neat, keeps best faith with such darkness, because it is not excessively
realised and so remains permeable to fundamental obscurity and mystery, then
there may yet be life – even a life that we neglect to our own impoverishment
and peril – in the knight with the symbol on his shield. Allegory, in the end,
seemed promising to us because it communicates with mystery; and, given our
liturgical purposes, because it is abstract enough to be co-owned by a large
group of people – by anybody and everybody willing to go on a quest. Especially because such abstraction in The Faerie Queene is
richly communicative with life as we know it. For Spenser’s legend of The
Redcrosse Knight is not an
escapist fairy tale; it really gets into the vein of things: into sexuality,
extending to erotic dreams, infidelity, even the threat of gang rape; into
depression (which Spenser calls despair), going so far as an extended
representation of suicide, which it later provocatively relates to the
temptations of transcendence. So The
Faerie Queene seemed to us to offer exciting
potential for retelling the story of St George, now, for today’s world. Much of
this is to do with ambiguity, but much of it is also due to the mysteriousness
of allegory married with a kind of ordinariness.

Allegory
in Spenser operates in a flickering, intermittent, multifarious fashion of what
is always ultimately a dark conceit, one which is elegantly resonant with and
expressive of just such an unsecured and experimental – now anguished, now
joyously creative – spirituality as ours might be in our own doubtful,
globalised and diverse present.

Spenser’s
Redcrosse is pellucidly etched as the Redcrosse Knight or Holiness. But he is a
Christian, hopefully fighting his own demons; he is equally an insufficiently
mortified man under the sign of the cross which may be morbidly scored into his
very breast; a sinner whose every breath and deed stains him further with sin.
He is also a gallant knight in the service of the Faerie Queene; and he is the (renegade)
lover of the semi-divine Una and the (renegade) lover of the very profane Duessa.
And he is St George! an avatar of specifically English saintliness; and he is a
crusader. And even the returned Christ who defeats Satan and regains paradise.
He is various as any human person in short, and the various things he is arise
from the number of different quests he is embarked on. And these are but aspects
of or turns within the ONE quest which is the deeper, hungry thing that drives
him. Because sometimes he is looking for a woman. But for love or for sex? The sacred Una
or the profane Duessa? And then, suddenly, all the life force just drains out
of him or turns against itself. Is it that, in his restlessness, he was really
always just looking for death? Or then again is death just the necessary door
to transcendence, with the New Jerusalem gleaming in its aperture? Or is it
finally some more wordly, some specifically English apotheosis that Redcrosse
is after? We find out as we go and the answers are contradictory and unexpected
and, as a result, engaging to the extent that the experience of the quest may
provoke us into our own analogous, necessarily treacherous search for meaning
and value.

What
I have been trying to do in the introduction to this book is convey something of the
richly ambiguous material Spenser contributed to our project of creating a new
poetic liturgy for St George’s Day, and how powerfully his early modern story
can still speak to us, if we read it with sufficient imaginative intensity and
engagement.  Spenser’s poem reconceives
the meaning and purpose of the red cross and St George in a questing narrative
where a repentant Redcrosse only realises, and in a sense becomes, England’s
patron saint, after a whole series of errors and failures of a notably unheroic
character.'

On the evening of Saturday the 17th of November the RSC will be performing Redcrosse
at Coventry Cathedral – the new poetic liturgy talked about above which Ewan Fernie (Shakespeare Institute) wrote with the major
poets Jo Shapcott, Michael Symmons Roberts and Andrew Motion, and the
theologian Andrew Shanks, as part of a multi-grant-winning Religion and
Society project. You can find out more here or visit the website to buy tickets here. We will also be launching the book after this performance and you are invited! Click on the image below to view the invitation. 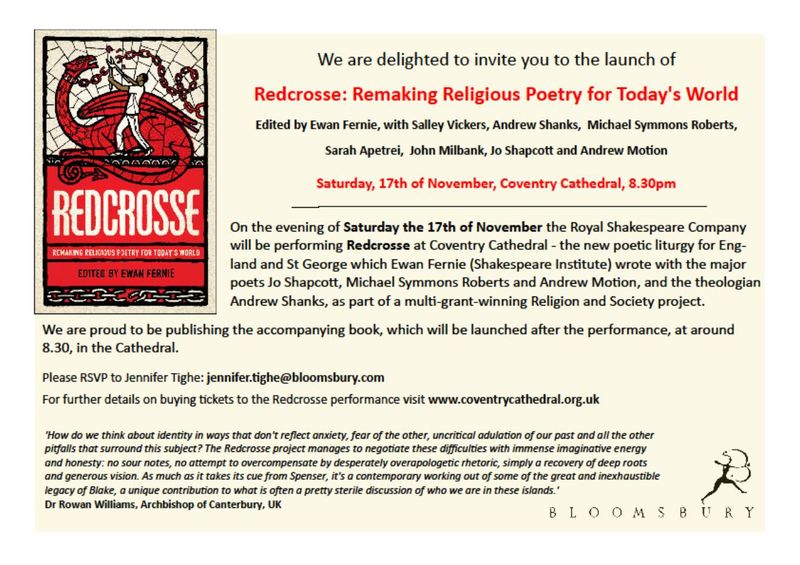