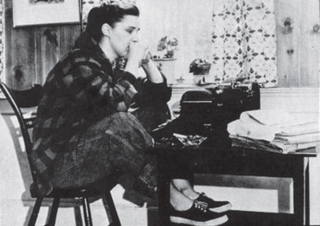 In December 1956, a few months after
the publication of her novel Peyton Place, Grace Metalious was invited
to appear on television’s hottest new talk show, Night Beat. The
brainchild of Ted Yates and Mike Wallace, whose irreverent and confrontational
interviewing style quickly earned him the nickname “Mike Malice”, Night
Beat pioneered late night programming pulling into televisions’ orbit
millions of viewers eager to watch the smouldering Wallace interrogate the rich
and the famous. “What Yates persuaded me we should do on Night Beat,” Wallace
later recalled, “was to hurl a thunderbolt into that smug and placid world”
of television news journalism and, by extension, the tepid topics they covered.
That night they hurled Grace Metalious.

Nervous and uneasy, Grace felt especially
vulnerable under the Night Beat gaze, not only because of its
hard-hitting reputation but because the show was recorded live: an unedited
hour under tight camera closeups, stark backgrounds, and a one-on-one exchange with
Mr. Malice. As she takes her seat, Klieg lights come up almost immediately,
wrapping her face in blinding, stark white illumination. Her new boyfriend, T.
J. Martin, hides below her chair. Wallace lights a cigarette, slapping the
smoke toward his guest like a B movie police interrogation. Already
uncomfortable in the requisite panty girdle and skirt that replaced her comfortable
dungarees and flannel shirt, Grace wilts under the leering gaze of her host:

“I thought your book was basic and
carnal,” Wallace sneers, his cigarette stabbing the bluish air.

“You did, huh?” Grace squeaked

“What gives you the right to pry and
hold your neighbours up to ridicule?” Graces’ eyes moistened.

Poised off-stage in her Schiffli-embroidered
dress, fashion model Jackie Susann watched in fascination and horror as Wallace
hammered away at America’s most “sexsational ” authoress. As Barbara Seaman
tells the story, Susann prayed for divine intervention. “Don’t let this woman
cry in front of millions of people,” Jackie pleaded. “Get her through this
show, God, and I won’t smoke another cigarette tonight.” Grace plays with her ponytail,
she twitches, pulls at her skirt; but she does not cry. Then, suddenly, she
alters course temporarily rattling Wallace by calling him by his hated birth
name. “Myron” she taunts, “tell the audience how many times you’ve been
married.” Taboo, even on late night television, Wallace is speechless and
angry. He refuses to talk about his three divorces.

No longer the orphans of academia,
bestselling novels have attracted serious scholarly attention, their popularity
no longer suspect but rather a pointed justification for analysis and inquiry. For social historians on the trail of the
ordinary and everyday bestsellers provide an especially productive point of
entry into the prosaic, calling attention not only to practices of leisure and readerly
desire but to the unquiet habits of fans and detractors alike. “Literary texts,” the critic Terry Eagleton famously taught us, "do not exist on bookshelves,
they are processes of signification materialized only in the practice of
reading.” And no book is ever read more enthusiastically than the latest
bestseller.

Still, texts are more than words on a
printed page. Big sellers are also big talk pulling into polite conversation
and onto the national imaginary the open secrets of the street, the kitchen,
and conversations forged “between you and me.” A “literary H-bomb” that
scandalized America, more people read Peyton Place than any other work
of fiction up to that time. One in 29 Americans bought the book, countless
others borrowed or stole it and we can only imagine how many flipped through
its pages digging out bits of plot, pieces of characters, and quotable lines. Yet,
to pick up old copies of Peyton Place is to glimpse the other side of
print culture, the verbal pentimento that is also and always wedged beneath its
dogeared pages: words fiercely underlined, marginalia fixed with red stars,
recognition and disapproval uttered in flaming exclamation points. “Sheila!” —
Joanie B. scribbles on page 149, “we need to talk!” Two images emerge from the
fan letters and memories of readers. The first is that of a solitary figure
reading Peyton Place at night, usually with a flashlight under the
covers. The second is that of a knot of women or pair of teenagers, huddled
together in excited speech.

It is this long-remembered whiff of
salaciousness no doubt that keeps Peyton Place in the air of public
memory, but we forget the extent to which the winds of controversy took shape
in the excitable speech that conjoined “dirty” novel with scandalous “New
England wife and mother of three,” a description that circulated in tandem with
the name Grace Metalious. We forget, in other words, that the literary
enfranchisement of Metalious was achieved, at least in part, by the seemingly
incongruous coupling of a sexually candid book with a respectable housewife — a
schoolteachers wife no less — from America’s most “puritanical” hinterlands.
Today, Grace Metalious is all but forgotten, her remarkable achievement almost
erased from the cultural literary landscape, an uncoupling few could have imagined
at the time. Between 1956 and 1964, Grace Metalious became a household word,
her name and image as famous and controversial a text as the novel she wrote.

There are, as historian Nancy Hewitt
aptly put it, “no permanent waves” of feminist struggle, no great surges of
liberation superseding one another amidst a sea of inaction and silence.  Like all social movements, “second wave”
feminism was a mélange of notions, ideas, emotions, needs, aspirations,
ambitions, and hopes that were always “in the air” commingling, overlapping,
and intersecting, as Hewitt reminds us, with a diverse range of progressive
moves and acts. We don’t often think of scandalous talk as one of these acts
and yet what invites more intensive collective commentary or sets into motion
with more force the ordinary affects of life — that sentient realm of
expectation and desire that  “catch
people up in something that feels like something?”. Quite suddenly, it seemed, the
problem that had no name grew immanent in the nooks and crannies of everyday
life, exerting a certain flash of recognition among those on the doleful
fringes of public life, came to ground in the utterance of a name, the repetition
of a story, the effort to say something.

Certainly, this is part of Peyton
Place’s legacy as a bestseller and part of Grace Metalious’s historical
meaning as a writer. In the years before the “revolutionary” 60s, feminism was
indeed “in the air”, winning for itself a public place in many small acts and
unsure moves as readers excitedly spoke of this, that, and the outrageous Peyton
Place — “can you believe” — written by a mother of three and the wife of a
New England school teacher. “Did you hear that she was divorced again?”

– the above is an edited extract from Must Read: Rediscovering American Bestsellers edited by Sarah Churchwell and Thomas Ruys Smith. If you liked what you read then you must read the rest of the chapter on Peyton Place and Grace Metalious here. It really is brilliant.

Today we will be giving away a copy of Must Read: Rediscovering American Bestsellers on our twitter. All you have to do is tell us what your favourite American bestseller is. The winner will be chosen at random. Click here to join in the fun.