The most
popular contemporary venue for costuming and disguise in the masquerade and
fancy dress traditions is Halloween. This ritual but informal festival has
become a representation of North Americanness, both for new immigrants and in
places where North American culture is transplanted and marketed. Halloween has
transcended its ethnic roots, appropriating and transforming some of its
aspects but reinventing and creating new referents for a great many others.
While the date of 31 October is a fixture in the calendar, the way in which
Halloween has been marked has had a very fluid nature without official origin
or sanction, though by the twenty-first century, it has definitely been
appropriated by commercial interests.

In
mid-nineteenth-century North America, the observation of Halloween was thought
to be the prerogative of first-generation Irish or Scottish immigrants.
Middle-class families may have practiced contemporary versions of ancient
divinatory rituals at home in their parlors, but for lower-class men, the event
was marked by pranks outside the home and in the streets. Some form of
disguise, perhaps as simple as smearing soot or burnt cork on the face, may
have been part of the ritual as it had been with entertainments such as Mardi
Gras, but it did not bear similarities to the fancy dress vogue that coexisted
alongside it. In the late nineteenth and early twentieth centuries, college and
university students used the evening for pranks, which had some impact in
adding the holiday to the North American cultural calendar as well as its
associations with youthful exuberance and rowdiness. By the turn of the
century, most places in North America had rid themselves of festivals that
inspired raucous behavior by outlawing them, institutionalizing them with
parades, or domesticating them entirely. It followed that Halloween, as a final
holdout of transgression on the margins of mainstream commemorative practices,
would invigorate older traditions of masking as they became more circumscribed
elsewhere.

Through the
very early twentieth century and by the 1920s, at the height of the civic
pageantry craze, fancy dress parties or more structured street parades had
become an optional way for both children and adults to mark the evening of 31
October. The icons of bats, black cats, witches, and goblins, as well as the
traditional colors of orange and black, were well in place and commercialized
by this time, and they were featured in the Dennison Crepe Paper Company’s Bogie
Book, first published in 1909. The commercial importance of Halloween thus
became established. Through the interwar years, while civic organizations were
behind an increasing number of structured Halloween celebrations, which often
included fancy dress competitions, these did not serve to eliminate or reduce
the pranks and public mischief as was hoped. The tension between the fancy
dress carnivals being promoted as family entertainment and the anarchic aspect
of the entertainment appropriated by adolescents led to a popular misconception
that a children’s holiday was being overtaken by adults and adolescents.

The
children’s trick-or-treating ritual as it is known today was introduced in the
late 1930s, but it really did not gain momentum and wide acceptance until the
1950s, transforming Halloween into a rite of consumption and giving it strong
retail potential. Children’s Halloween costumes were produced in increasing
number and variety by manufacturers over the course of the century. As the
entertainment industry grew, characters inspired by television, movies, and particularly
the frightening Halloween Hollywood movie genre became part of the repertoire.

By the
1970s, Halloween as a children’s celebration, characterized by costumed
trick-or-treating, had become entrenched in North American mass culture.
Simultaneously, Halloween has gradually been appropriated by adults, whose
participation is driven by retail and leisure industries. Halloween dressing up
by adults is usually used as an unstructured means of parody. Because of the
outlet for transgression Halloween provides, in many urban areas, gay cultures
have used Halloween costumed parades and parties as reaffirmation. Halloween at
the end of the millennium has become an event for adults, with an estimated 65
percent of North American adults participating beyond just giving out candy to
children.

- the above article was supplied to us from our pals at the Berg Fashion Library. You can read the full article, jam packed with info about the history of masquerade dress here. Here are some literary fancy dress ideas to get you thinking! (sadly, I couldn't find any female ones on google outside of the 'sexy Alice in Wonderland' category 🙁 but I'm sure I'm sure that it wouldn't be too difficult to whip up a Cathy
from Wuthering Heights – scary long dark hair, white nightgown, fake blood… and of course Miss Havisham – a character made for Halloween!) 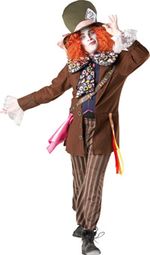 One thought on “Dressing up on Halloween”